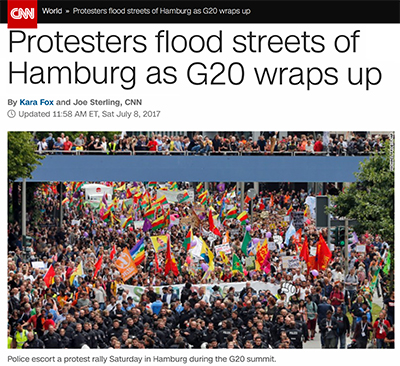 CNN claimed peaceful activists demonstrated at the G20 summit and downplayed the violent riots reported by every other news agency.

“An eclectic and international mix of demonstrators peacefully tramped through the streets of Hamburg on Saturday, a show of anti-capitalist muscle in earshot of the world’s top leaders who were finishing up at the G20 summit,” the fake news outlet reported. “Up to 50,000 people turned out, police in the northern German city estimated.”

CNN didn’t even mention the civil unrest that dominated the protests until the 12th paragraph of the article, despite Hamburg looking like a bombed out city of World War II.

But the rest of the mainstream media did report on Saturday’s violence which CNN glossed over.

“German police braced for a third day of violent clashes with anti-capitalist protesters bent on disrupting the G20 summit of global leaders in Hamburg port, after radicals torched cars, smashed shops and injured officers overnight,” reported Reuters. “While around 100,000 protestors have staged peaceful marches since Thursday, a hard core of the Black Bloc militants from across Europe have looted stores, set fire to street barricades and hurled bottles and paving slabs.”

Even RT, a Kremlin-run media outlet, reported the protests more accurately than CNN.

“Violent confrontations between police and protesters continued in Hamburg in the early hours of Sunday morning, even after all of the G20 leaders had left,” the Moscow-based network reported. “Police said they had to deploy water cannon against demonstrators who were burning vehicles.”

CNN’s deceptive article underscores how the network LARPs as objective journalism while misleading viewers with propaganda designed to steer the public towards “spectator democracy.”

The arrogant elites believe the public is “too stupid” to run things on their own, so they use establishment media like CNN to turn people into mere bystanders in society with political opinions sculpted by corporate media so they never learn to question authority.