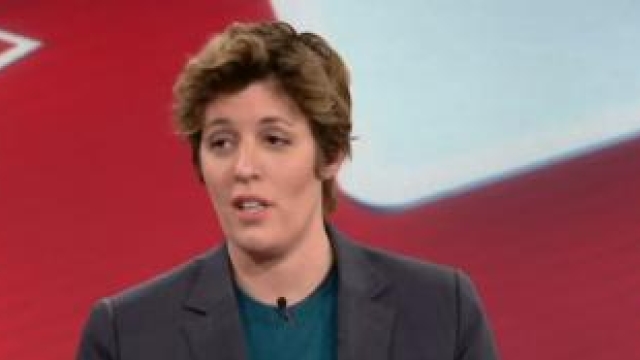 A CNN commentator claimed Saturday that Donald Trump will put people in camps and do away with the writ of habeas corpus if he is elected President.

Daily Beast columnist Sally Kohn was taking part in a CNN panel, and when asked what her final thoughts were, she blurted out that Trump would become a rabid dictator.

“I’m worried. When he institutes internment camps and suspends habeas, we’ll all look back and feel pretty bad.” Kohn declared.

Earlier Kohn bemoaned that the media was giving Trump too much attention, saying that there is “a fine line between covering a candidate and amplifying a candidate.”

“I’m sorry, but, yes, Donald Trump may be the Republican frontrunner.” Kohn stated.

“I still think we’re giving him way too much attention in proportion to the other candidates who also had victories to celebrate tonight.” Kohn added, before bizarrely determining that Trump plans to throw Americans in camps.

Fellow commentator Jeffrey Lord was asked to respond to Kohn statement, but couldn’t find the words, instead declaring that he was “speechless.”

The attacks on Trump amplified over the weekend, with Saturday Night Live putting together a skit featuring “real Americans” dressed in KKK and Nazi garb declaring that they were Trump supporters.

Meanwhile, photographs of Trump supporters pledging to vote for him by raising their hands at a rally were shunted around social media with claims that they were imitating Nazi salutes.

Not only is the photo genuinely creepy and scary, Trump was the one who initiated the crowd to do it. #NeverTrump pic.twitter.com/TDI7TViKUe

Steve Watson is a London based writer and editor for Alex Jones’ Infowars.com, and Prisonplanet.com.