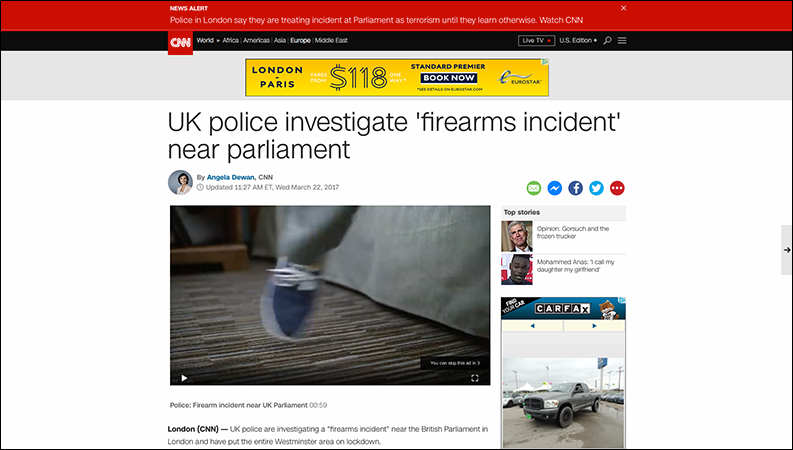 UPDATE: Reports are circulating that the attacker was an Islamist who acted alone.

CNN downplayed the ISIS-style Parliament attack as a “firearms incident” despite UK media reporting it as a combined knife and car attack.

The network published an article with the headline “UK police investigate ‘firearms incident’ near parliament” around 11:30AM EST.

“London’s Metropolitan Police said on Twitter they were called at approximately 2:40 pm to reports of an incident near Westminster Bridge and that it was being treated as a firearms incident,” CNN said. “TV images have emerged of a car crashed into a fence outside the Parliament building.”

CNN did admit a police officer was stabbed in the “firearms incident,” but the article was light on details.

In comparison, both the Sun and the Daily Mail said a knifeman was shot outside the UK Parliament right after he mowed down pedestrians on Westminster Bridge, an attack which copies the methods used by jihadis during recent terror attacks.

And the Drudge Report had the following main headline as the CNN piece was going up:

“We heard a loud bang, lots of shouting and men running around. Someone rushed through, attacked a policeman,” a witness told The Sun. “He appeared to be carrying a knife or a gun. We then heard gunfire, five or six rounds.”

“The man approaching one of the police officers with a knife.”

As of this writing, police have not identified the suspect, although reports circulating on social media suggest the suspect was Middle Eastern.

Additionally, the two methods of the attack – a knife and a vehicle – mimick recent terror attacks in the West.

In November, a Somali refugee attacked at least nine people with a knife at Ohio State University.

“A high-ranking faculty member who spoke to NBC 4 Columbus said that one of his colleagues was in Watts Hall at the time and was slashed in the leg with a machete,” reported the Daily Mail on Nov. 28. “…The attack then got out of the car and started stabbing and slashing victims, a witness said.”

More recently, in Germany, one person was killed and three were injured by a knife-welding jihadi who shouted “Allahu Akbar” at a train station near Munich.

A similar attack happened on a train between Würzburg and Treuchtlingen.

“A German official described the footage of the teenage suspect in the German train stabbings as a ‘classical farewell video’ of a suicide attacker that indicates he was inspired by ISIS,” CNN reported. “Interior Minister Thomas de Maiziere said the 17-year-old also left a goodbye letter saying he prayed that he could take revenge on all infidels.”

And let’s not forget the lorry attacks in Berlin and Nice, France, in which dozens of people were mowed down by jihadi drivers encouraged by ISIS to use trucks to kill “infidels.”

The Parliament is located in London, which has attracted so many Muslim migrants over the past several years that the city is now called “Londonistan.”

Even the mayor, Sadiq Khan, is a Muslim.