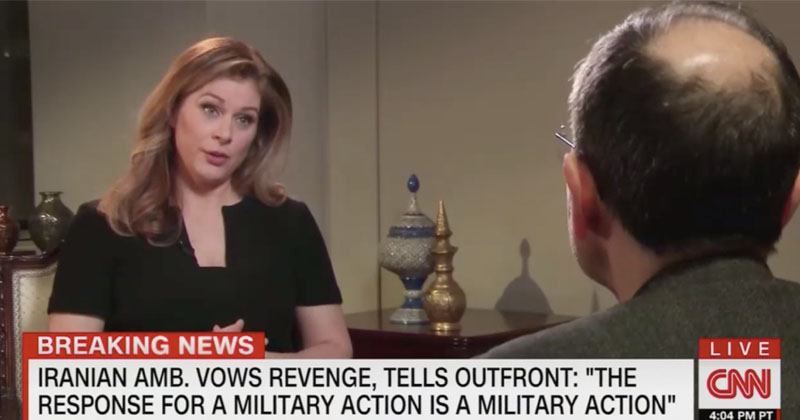 Burnett began by asking Ambassador of Iran to the United Nations Majid Ravanchi whether he thought President Trump was telling the truth about his motives in targeting General Qassam Soleimani last week.

What matters is the U.S. deeds, not the words,” Ravanchi responded. “What they are doing against the Iranians are exactly to put lots of pressure on the Iranian people to stand up, and that is contravention of U.S. obligations based on international law.”

Burnett then tried to frame a moral moral equivalence between Soleimani, a known terrorist plotter, and Vice President Mike Pence, or Secretary of State Mike Pompeo.

“Americans can understand though what the reaction would be, if someone that influential were killed here or killed in another country, but someone who was let’s say, the Chief of the C.I.A., the Defense Secretary or even a Vice President. Does this death change the game completely between Iran and the United States?” Burnett asked.

If CNN was this friendly to the Trump administration as it was with Iran’s PR, perhaps its ratings wouldn’t be at record lows.

Journalist David Marcus of the Federalist condemned the softball interview, calling it “journalistic malpractice at best” for not even asking about Iran’s numerous military actions against the U.S. in recent months.

How on earth can one interview the Iranian ambassador without asking about Iranian support for a violent attack on an American embassy last week? Or how about an attack on a base that left an American contractor dead? Or the shooting down of an American drone over international waters?

Time and again in the interview Ravanchi claimed that by killing Soleimani the US had moved from an economic war (pulling out of the Iran Deal) to a military war. But Iran has engaged in military actions against America and American interest for months now. The network that fatuously insists they are all about the facts allowed the ambassador to flat out lie to the their viewers without the least bit of resistance.

This is simply journalistic malpractice at best. At worst, it is giving comfort to an enemy dedicated to the destruction of the United States (Death to America) by handing over the CNN platform for the pushing of propaganda, including failing to mention at all the Iranian regime’s brutal and murderous crackdown on protesters in its own country last month.

Alex Jones lays out how the Deep State was manipulating Trump using backchannels in Iran to try to create a national crisis to embarrass the president.