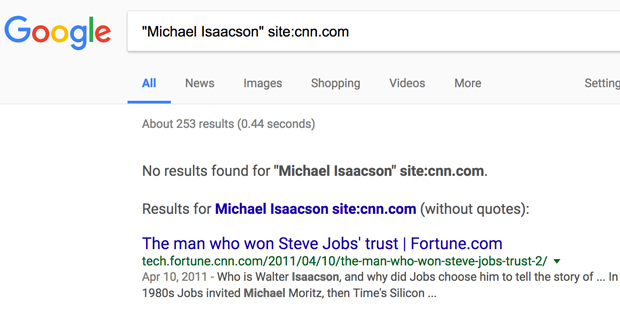 CNN has completely ignored the pro-Antifa college professor who tweeted about “dead cops” to focus instead on President Trump retweeting a meme video showing himself hitting Hillary Clinton with a golf ball.

.@CNN has published THREE stories about the “Trump Golf Tweet” but NOTHING about #Antifa Prof., Mike “Dead Cops” Isaacson. Why? #FireMike pic.twitter.com/XDnXRu4OqX

A quick search of CNN.com shows no mention of Michael Isaacson whatsoever:

You’d think this would be a major news event for CNN to cover, especially considering that a FOLLOW-UP story went viral on Infowars, but no: CNN decided that Hillary Clinton’s honor was much more important than dead cops, and that Antifa’s reputation must be protected.

“On the eve of a critical week of foreign policy challenges, Donald Trump started his Sunday by retweeting an edited video of him hitting a golf ball into Hillary Clinton’s back — and her falling over from the impact,” CNN’s Chris Cillizza wrote with unsubtle bias.

Who cares? It takes less than a second to retweet on Twitter, far less time than it took Isaacson to craft his “dead cops” tweet – and his tweet was more impactful outside the CNN echo chamber.

And let’s not forget that, as Secretary of State, Hillary routinely solved her foreign policy challenges with a “we came, we saw, he died” doctrine.

The foreign policy challenges Trump faces is a direct result of the Clintons and their globalist cohorts arming ISIS-linked “moderate rebels” in the Middle East and giving ICBM technology to North Korea.

Given that, it’s actually quite fitting for Trump to start his “critical week of foreign policy challenges” by hitting Hillary with a golf ball.