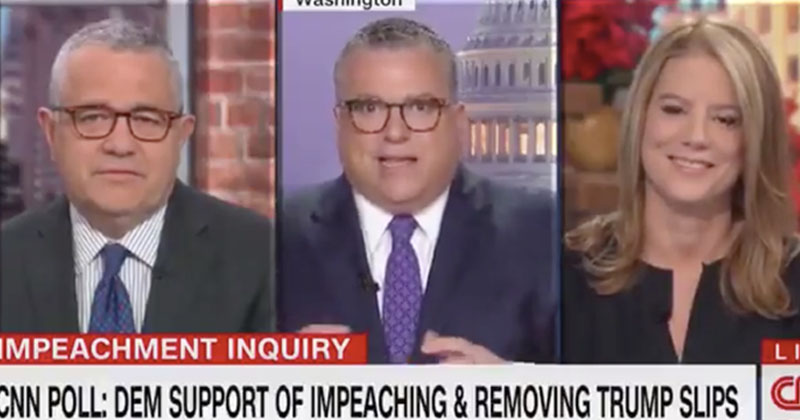 Host Alisyn Camerota first downplayed the implications of the CNN poll, noting that Democrat support of impeachment has “softened a little bit.”

The poll conducted between December 12-15 shows Democrat support of impeachment at 77%, a 13-point drop since last month.

“I get it, but, I mean, you know, life mean — life has shown us that polls are sometimes wrong. And, David, that poll is wrong. Just because I said so, OK?” pic.twitter.com/UpQ9k4OMMo

“I don’t believe that poll for one second,” CNN legal analyst Jeffrey Toobin said of the internal CNN poll. “The 90 to 77 percent. It’s just – you know, I don’t believe it. Like, it makes no sense that that number would change like that.”

“I don’t know what’s not to believe,” Chalian said. “You call people on the telephone, you get their information. You pop out a survey. This is what those that we polled told us.”

“I get it, but, I mean, you know, life mean — life has shown us that polls are sometimes wrong. And, David, that poll is wrong. Just because I said so, OK?”

House Democrats are set to vote on two articles of impeachment against Trump on Wednesday and it’s likely they have enough votes to pass them to the Senate.

Harrison Smith breaks down the headlines coming from mainstream media and how impeachment can in fact help President Trump.