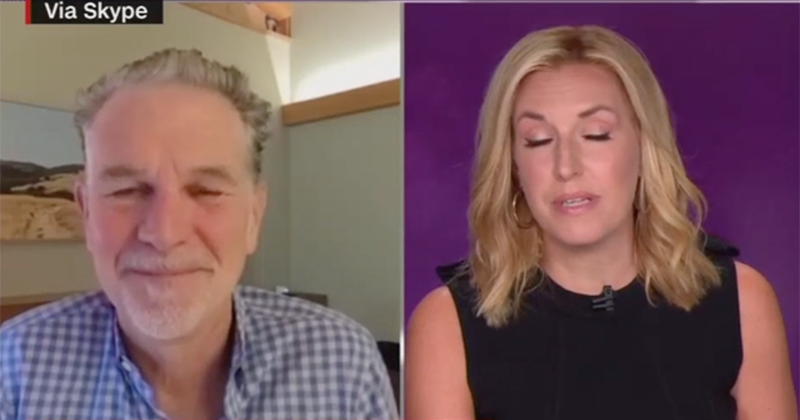 With Netflix under the microscope of the entire world in regards to its release of a film that blatantly sexualizes children, CNN found itself talking to the CEO of the company Thursday, yet failed to ask one single question about the matter, instead lavishing praise on the company for championing “diversity”.

Netflix co-CEO Reed Hastings was interviewed on CNN by Newsroom co-anchor Poppy Harlow, who stuck to scripted questions that amounted to nothing more than an infomercial for the guy’s new book about Netflix’s corporate structure.

At one point Harlow even applauded Hastings for promoting more diverse programming then other streaming services.

Of course, very few people expect actual journalism out of CNN at this point, but it is inextricable to believe that the network was unaware of the global headlines concerning Netflix while its CEO was in their newsroom.

The streaming company is facing a mass boycott over the premiere of the film ‘Cuties’, which contains almost nude children twerking, in addition to a litany of other disturbing content that IMDB has warned is “lawfully defined as pedophilia.”

In case you believe everyone is just naive and didn't think this had anything to do with pedophilia: pic.twitter.com/z9IBpup2JV

Drop whatever you're doing and read this thread right now.

This putrid filth has received lavish praise from Rolling Stone, the New Yorker, the Independent and others.

I've never seen anything this transparently vile being promoted by the establishment.

These people are sick. https://t.co/vxM8U4EchL

No more clips but here is what else happens:

#CancelNetflix has become the number one trend on Twitter:

Are we really surprised that a company that would give contracts to Obama, Susan Rice and is partially owned by Soros condones pedophilia and child-twerking?#CancelNetflix

In addition, more than 600,000 people have signed a petition pledging to cancel their Netflix subscription.

It remains to be seen how the company will respond, however it previously apologised for using “inappropriate artwork” to promote the release. That was tame compared to the actual footage in the movie.

We're deeply sorry for the inappropriate artwork that we used for Mignonnes/Cuties. It was not OK, nor was it representative of this French film which won an award at Sundance. We’ve now updated the pictures and description.

In what can only be described as ‘peak 2020’, leftists, with the aid of the establishment media, are actually defending the movie:

They're all promoting it as a "coming of age" movie. Watch the clips. Hideous. pic.twitter.com/nYT64hKnta

Netflix platforms a thinly veiled CP movie that overtly sexualizes children multiple times & numerous other things too gross that I don't even want to detail them in text.

The Telegraph is accusing Netflix critics of being 'anti-child sexuality' pic.twitter.com/KiWh0uRv1d