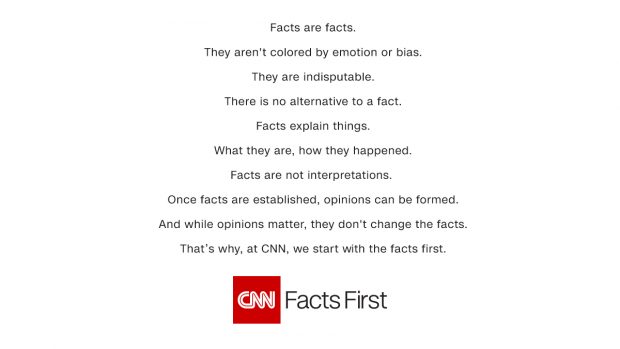 CNN has launched a “Facts First” marketing campaign while downplaying the Uranium One scandal implicating numerous Democrats for having ties to Russia as they accuse President Trump of the same.

CNN head Jeff Zucker sent a memo to employees claiming the network will now focus on “facts first” because they “aren’t colored by emotion or bias.”

“While significant research shows that our brand, despite consistent attacks from Washington and beyond, has never been stronger, we heard you and we agree,” Zucker wrote. “We think there is no better time to take a clear stand for who we are and what we believe in.”

Yet CNN has done little reporting on the growing outrage over the Uranium One deal in which high-level Democrats forged strong ties with Russia.

A quick search on CNN reveals only a handful of recent articles that even mention the uranium deal despite overwhelming documentation that reveals the facts of the scheme.

“Trump pressed on with his attacks against Wilson an hour later, re-tweeting posts that suggested without evidence that former President Barack Obama and former Secretary of State Hillary Clinton ‘rolled out’ Wilson ‘as a distraction’ from an unrelated, years-old controversy involving the Obama administration’s approval of Russia’s purchase of a controlling stake in a Canadian company with US uranium assets,” wrote CNN’s Jeremy Diamond, with emphasis added. “The company, at one time, included investors who had contributed to the Clinton Foundation.”

Did Diamond not get the “Facts First” memo?  Claiming the controversy is unrelated and no longer relevant isn’t his job as a CNN journalist, if the memo has any weight and isn’t simply a cover for CNN to pretend it cares about objective news.

Furthermore, CNN won’t even report on the fact that special counsel Robert Mueller is now investigating Clinton ally Tony Podesta for his ties to Russia, nor are they mentioning the fact that Mueller himself was involved in the scandal.

Uranium One is a Russian-controlled firm that made close financial ties to the Clinton Foundation while Hillary Clinton was Secretary of State, which cumulated in Russia controlling 20% of all U.S. uranium produced.

“At the heart of the tale are several men, leaders of the Canadian mining industry, who have been major donors to the charitable endeavors of former President Bill Clinton and his family,” the New York Times admitted in 2015. “Members of that group built, financed and eventually sold off to the Russians a company that would become known as Uranium One.”

“Since uranium is considered a strategic asset, with implications for national security, the deal had to be approved by a committee composed of representatives from a number of United States government agencies. Among the agencies that eventually signed off was the State Department, then headed by Mr. Clinton’s wife, Hillary Rodham Clinton.”