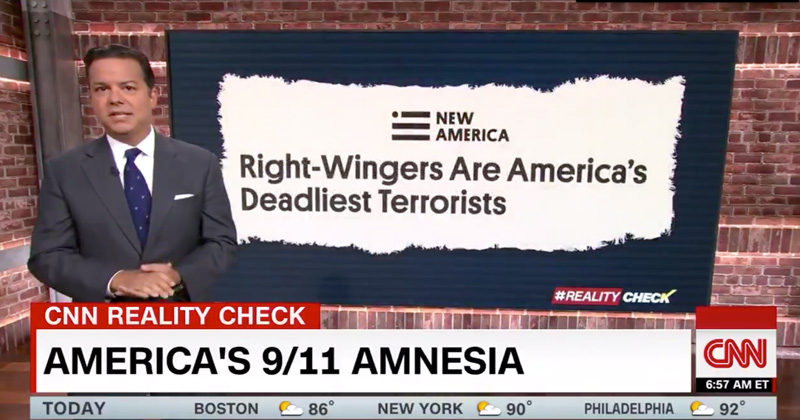 CNN used the 18th anniversary of 9/11 to tell audiences that while Jihadist attacks knocked down the towers killing 3,000 people, Americans should be more fearful of terrorism from “white nationalists.”

While acknowledging several Jihadist attacks that have taken place on US soil since 9/11, CNN commentator John Avlon claimed that more terror attacks have reportedly been carried out at the hands of white people.

“…In the past year, we’ve been forced to confront a growing threat from another form of violent extremism: white nationalist terrorism,” Avlon said, listing a few thwarted Islamic attacks before shifting his commentary to the narrative that white people are the new terror threat.

“These terror suspects echoed white supremacist conspiracy theories about ‘replacement,’ hatred toward immigrants and refugees and ambitions of sparking a race war,” the commentator added, while flashing a headline from the New America think tank claiming “Right-Wingers are America’s Deadliest Terrorists.”

“…Here’s a startling statistic,” Avlon claimed, “since the 9/11 attacks, right-wing terrorists have killed more people in America than jihadist terrorists, according to the New America think tank,”

Many were angered at the network’s pathetic efforts to demonize white people by attempting to tie them to 9/11 – on the anniversary, no less.

I was wrong. It’s real. CNN says the real lesson of 9/11 is violent white people. https://t.co/neZtUQ7FOe

CNN wants you to know, on this date, 9/11 – the day Islamic terrorists killed 3000 Americans IN ONE DAY-that according to some idiots in the gov, “right-wing” white people have killed more.

Yeah, that’s what they thought was important to remind us of on this day. #CNNSucks https://t.co/mwv1MO8MMQ

Well CNN just spent 5 minutes telling me how focusing on fighting White Nationalism is how we should remember 9-11.. They've gone all the way this time.. pic.twitter.com/7E2WNJ10KW