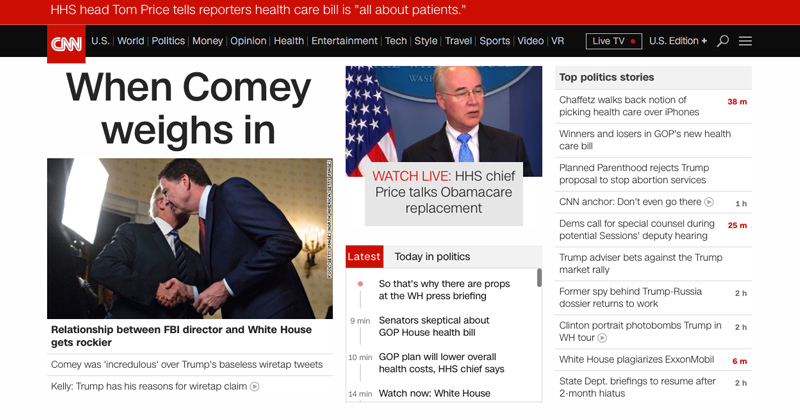 Editor’s Note: CNN has finally published an article on the WikiLeaks dump hours after this article was published. It’s worth noting that Vault 7 went live early in the morning and was featured predominantly on Drudge… and it took CNN at least six hours or so to respond.

WikiLeaks’ new trove of leaks dubbed Vault 7, which exposed the CIA’s covert arsenal of cyber-weapons and hacking techniques, has the entire world buzzing – except for CNN.

Currently CNN’s website doesn’t mention anything about the bombshell leaks, but did host a livestream of a Hillary Clinton luncheon.

This isn’t surprising given CNN’s disdain for WikiLeaks founder Julian Assange – and the truth in general.

WikiLeaks recently sued CNN for defamation after the network interviewed the ex-Deputy Director of the CIA Phil Mudd who “falsely called Assange a ‘pedophile.’”

“We have issued instructions to sue CNN for defamation…unless within 48h they air a one-hour expose of the plot,” WikiLeaks tweeted.

We have issued instructions to sue CNN for defamation:https://t.co/YLfyQ9ROCy

Unless within 48h they air a one hour expose of the plot.

Later that day CNN removed the clips of Mudd’s comments from the show’s Twitter account and issued an apology:

“An analyst on our air earlier today asserted that Julian Assange was a pedophile, and regrets saying it,” the network wrote. “In fact, CNN has no evidence to support that assertion. We regret the error.”

A separate batch of emails from DNC staffers show several message chains in which the aides brainstormed questions for upcoming CNN interviews of Republican presidential candidates.

“Wolf Blitzer is interviewing Trump on Tues ahead of his foreign policy address on Wed. Please send me thoughts by 10:30 AM tomorrow,” DNC research director Lauren Dillon wrote.

WikiLeaks scheduled a press conference Tuesday where Assange was set to explain the details about Vault 7 Year Zero documents, but the event was apparently subjected to a cyber-attack.