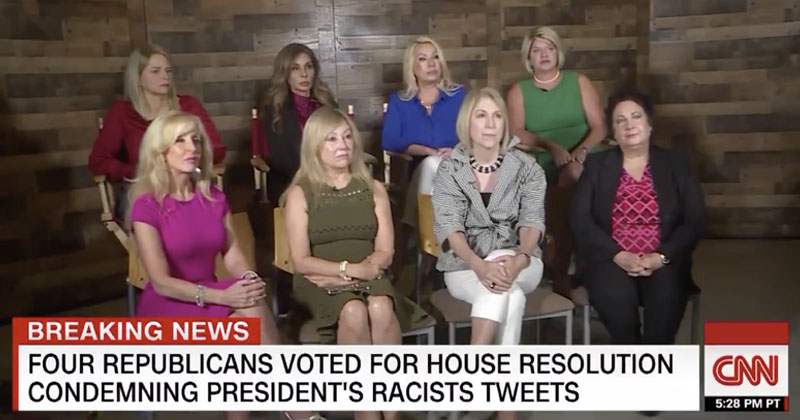 CNN brought on a panel of eight Republican women in hopes of convincing them that President Trump’s recent criticism of the far-left “Squad” was racist — but failed miserably.

During “Anderson Cooper 360” on Tuesday, the panel of Dallas women were asked if they thought Trump’s condemnation of the four Democrat congresswomen known as “The Squad” was NOT racist — all of them raised their hands.

"I don't think it matters. It's idiotic, what they're saying, so it doesn't matter if they're black or white."

Female Trump voters in Dallas, TX, deny any element of racism in the President's comments aimed at four Democratic lawmakers, all of whom are women of color. pic.twitter.com/wX3fouhHNy

“I’m glad [Trump] said what he said because all they are doing is inciting hatred and division, and that’s not what our country’s about,” agreed Gina O’Brient.

The CNN interviewer, dissatisfied with their answers, then read off the dictionary definition of “racism,” hoping that would somehow convince the women that Trump’s remarks fit that definition.

The women didn’t buy it.

“It’s a demonstration of how their ideology spills over. Even though they’re American now, so to speak, they’re not acting American.”

A third woman agreed, saying Trump is attacking their extreme rhetoric, not their skin color.

“I don’t think it matters. It’s idiotic, what they’re saying, so it doesn’t matter if they’re black or white,” said Peaches McGuire Coates.

The media has been desperately trying to spin Trump’s remarks as racist because in reality, he forced Democrat leadership to defend “The Squad’s” divisive rhetoric and extreme positions on immigration and identity politics.

The best hope America has to keep from sliding into fascism and authoritarianism at the hands of the left is President Trump.