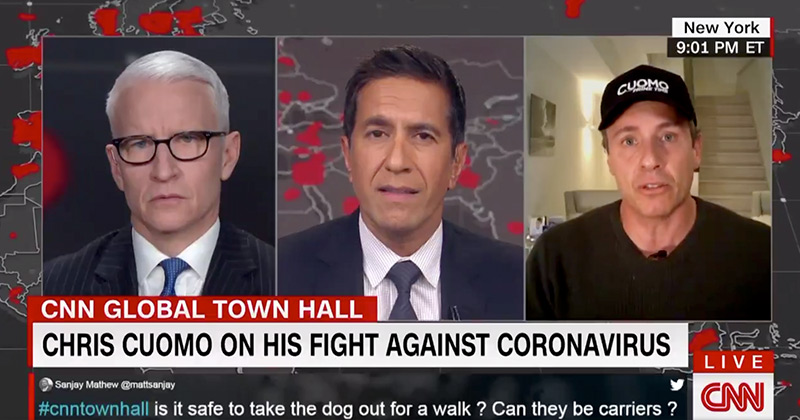 "The beast comes at night as we know the health care workers have taking to call the virus … I understand why. My fever has gone up a couple of degrees in the last 30 minutes. Nights are tough." – @ChrisCuomo, who tested positive for Covid-19, discusses his symptoms. pic.twitter.com/spfDdilnNg

“The beast comes at night,” Cuomo said of the virus. “As we know the health care workers have taken to calling the virus … I understand why. My fever has gone up a couple of degrees in like the last 30 minutes. Nights are tough.”

As most people know, The Bible’s Book of Revelation speaks of “two beasts,” one of whom “reigns over the kings of the earth” and another who is called the “false prophet” and forces the people of Earth to receive the mark of the beast “in their right hand or in their forehead.”

Could this “mark of the beast” be a COVID-19 tracking bracelet, tattoo or vaccine, all of which have already been proposed.

Interestingly, internet users are pointing the six letters in the word “corona” happen to add up to 66 when using their alphabetic digits to represent them.

Each letter of the word CORONA when asigned its number of position in the alphabet, then you add those numbers downwards, you will get a total of 66. Then when you count the letters of the name CORONA, you will total to 6 letters.
Therefore CORONA=666. pic.twitter.com/VWPOEXTZXv

Cuomo went on to assert that as someone dealing with the virus from home instead of being hospitalized, he’s still suffering.

“You suffer when you have this at home unless you are ridiculously lucky statistically and maybe karmically as well,” he said. “I can’t tell you how many stories I’ve had of people who have had a 100, 102 fever for 8, 10, 12 days.”

The CNN anchor stressed he wasn’t trying to scare people, but claimed he lost 13 pounds in 3 days despite “eating and drinking constantly.”

"Pain in my face… headaches, profuse sweating. Literally, my vision in my left eye is a little blurry," @ChrisCuomo says of his coronavirus symptoms.

"And you have these wicked phantasmagorical experiences that are not dreams," he says. https://t.co/83d4itSajm #CNNTownHall pic.twitter.com/jjzIonuJ1s

Dr. Gupta then asked if Cuomo has found “anything that works” for him in regard to dealing with the virus.

“The chicken soup is not just anecdotal,” Cuomo replied. “You look online, even if you go to the Journal of the American Medical Association, that has worked for me I believe. I believe it has lowered my fever at times.”

Continuing, Cuomo said, “Now, what I’ve also learned is there is so much BS on the internet that people are trying to peddle as cures. Fake pills, fake tonics, these mixtures of things that are actually decent ingredients. Vitamin C, Vitamin D are great supplements to have, but 10,000, 20,000 units they want you to take of this.”

“You’re not gonna overdose but it could be hard on your system,” he clarified. “People are selling a lot of lies and people are buying them up because of the desperation and I get it, but they don’t work.”

Describing his symptoms at the time, Cuomo claimed to have a fever of around 101, said he experiences headaches, severe sweating, blurred vision in his left eye and cannot sleep.

“And you have these wicked phantasmagorical experiences that are not dreams,” he said, describing seeing his dead father sitting on the edge of his bed the night before.

Wikipedia describes phantasmagoria as “a form of horror theatre that (among other techniques) used one or more magic lanterns to project frightening images such as skeletons, demons, and ghosts onto walls, smoke, or semi-transparent screens, typically using rear projection to keep the lantern out of sight.”

Despite all of this, he appears healthy as ever on television just hours before he is allegedly set to begin hallucinating.

Bill Gates is unmasking the real agenda behind Coronavirus and like always it’s about turning you further into human cattle.

Also, here’s Iron Maiden singing about the number of the beast.