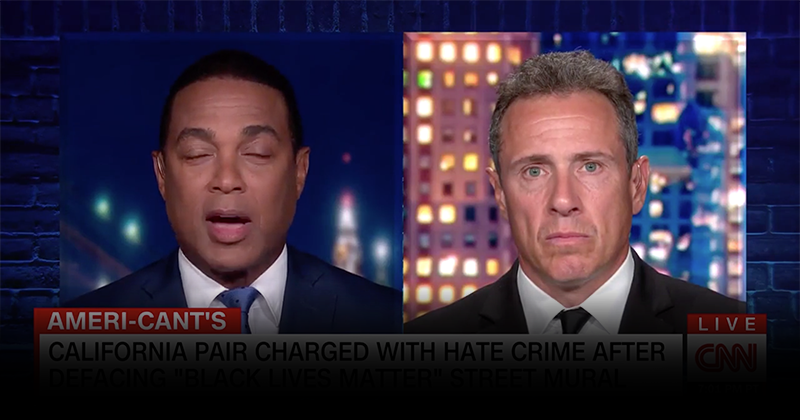 While discussing a California couple charged for painting over a “Black Lives Matter” mural, Lemon said, “You see the right-wing machine kick in, media kick in and see Trump’s poll numbers go south. They kick in with Democratic cities are in chaos right now. Is this what you want from Joe Biden? And they are taking your country away sand they are going to take down statues. ”

“Crime is rising. It’s so bad. Oh my, defund police. And the people who you saw there for the most part —not specifically, as a whole, fall for it. They fall for it. That’s why they do things like that. They want to paint over signs and think it’s our country.”

Actor Terry Crews clashed with CNN’s Don Lemon last night during an exchange in which Lemon ludicrously asserted that black on black violence should have nothing to do with the Black Lives Matter movement.

“This is the country that we built. Even though a rich diversity of people helped build the country, and many of us, meaning ancestors, for free — did not get paid for it, could not get an education, could not build wealth, are not on statues, Confederate or otherwise, are not on Mount Rushmore.”

“I think, listen … if they are going to put someone on Mount Rushmore, considering the history of the country, the first black president should be front and center.”