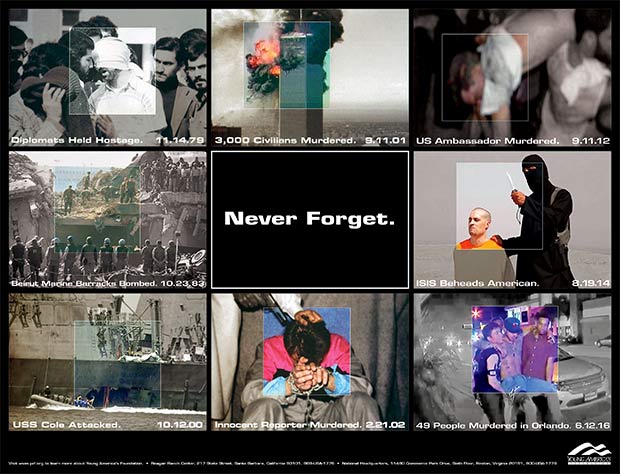 A college has ruled that 9/11 memorial posters put up by a conservative group are offensive to Muslim students.

The poster, produced by the Young America’s Foundation, caught the attention of the “Bias Protocol Board” at Wisconsin’s Ripon College after appearing throughout the campus.

Featuring the phrase “Never Forget” and images of numerous terrorist attacks, the image was accused of creating a negative “environment” where “students from a Muslim background would feel singled out and/or harassed.”

During a meeting Tuesday, a bias team member told YAF that the poster unfairly referenced just one religious group.

“There is nothing that this poster, in particular, adds to the conversation about 9/11, or about the politics of terrorism, or about national security or responses to it that couldn’t be done easily and more constructively without it,” the member said.

YAF says arguments from the school are nothing more than “the usual, bizarre leftist excuses that rely on feelings, rather than facts, to back up their censorship.”

“Just as remembrances of horrific events carried out in the name of Nazism or Communism include honoring other victims of those ideological treacheries, so does the remembrance of the attacks carried out by radical Islamists on September 11, 2001,” YAF said.

“The original need for us to create this project dates back to 2003, when we saw schools trying to sanitize 9/11 and not talk about who committed these terrorist acts,” Brown told The College Fix.

“I firmly believe our conservative viewpoints are being targeted,” Krueger said. “If others put up a poster that offends me or challenges my viewpoint, I simply try to open a discussion with them or fairly debate their viewpoints, not call upon a bias protocol board to step in and highly discourage the poster with potential consequences.”