Western media agencies have begun enthusiastically covering demonstrations in Argentina’s capital, Buenos Aires. CNN, AP, and the BBC have all covered the protests in equally vague terms, failing to identify the leaders and opposition groups behind them, while BBC in particular recycled “Arab Spring” rhetoric claiming that, “opposition activists used social networks to mobilise the march, which they said was one of the biggest anti-government protests in a decade.” 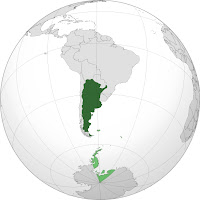 The Western media claims the protesters are angry over, “rising inflation, high levels of crime and high-profile corruption cases,” all the identical, vague grievances brought into the streets by Wall Street-backed opposition groups in Venezuela. Underneath these unsubstantiated claims, lies the International Monetary Fund, and threats of sanctions aimed at Argentina’s turning away from the US Dollar and the Wall Street-London dominated international financial order.

And like in Venezuela, a coordinated campaign against the Argentinian government, led by President Cristina Fernandez de Kirchne, has begun in op-eds across the Western media.

What a shame to see a country of such great economic promise swerving off the road to prosperity again.

The latest in a history of unforced errors began in 2007. National elections ushered in populist President Cristina Fernandez, who has led her nation to the brink of disaster by refusing to play by the rules of global finance. She restricted international trade, violated contracts and pumped out phony data to disguise the soaring inflation her policies brought about. All the while she scored cheap political points by blasting the rich countries of the north for their supposed economic imperialism.

Argentina took a grave step in May when it nationalized YPF, its main energy company. The takeover, condemned around the world, forced out Spain’s Grupo Repsol, which owned a majority stake in YPF. Repsol was providing the engineering know-how and financial investment to develop Argentina’s massive energy reserves—including the huge Vaca Muerta oil-and-gas find.

Negotiations to compensate Repsol for Argentina’s asset-grab will end badly for Argentina. The European Union is likely to impose sanctions. Repsol wants $10 billion, and it has sent the message to rival energy companies that it will not permit others to profit from its confiscated assets. Argentina will have a hard time finding partners to help it develop what should be a lucrative resource.

The financial coup against Repsol won strong national support. The approval ratings of Fernandez temporarily shot up. Even opposition parties backed the move. Government officials talked about how they had restored Argentina’s dignity by standing up to foreigners exploiting its natural bounty. Meantime, Fernandez kept the once-hot economy going by nationalizing private pension funds, redirecting the money into housing loans, and expanding welfare programs by decree.

Now Argentina has to pay the price.

What is likely to follow will be coordinated attacks including sanctions, isolation, political attacks, currency attacks, and of course US-engineered unrest in the streets, which can range from protesters merely clogging traffic, to escalating violence triggered by the now notorious “mystery gunmen” used in US unconventional warfare to destabilize, divide, and destroy nations.

But also like in Venezuela, if enough awareness can be raised in regards to what the West is doing, and the disingenuous intentions and interests driving opposition groups into the streets, these efforts being used to coerce Argentina back into the Western dominated “world order” articulated by US think-tank policy makers like Robert Kagan as serving “the needs of the United States and its allies, which constructed it,” can ultimately be thwarted.