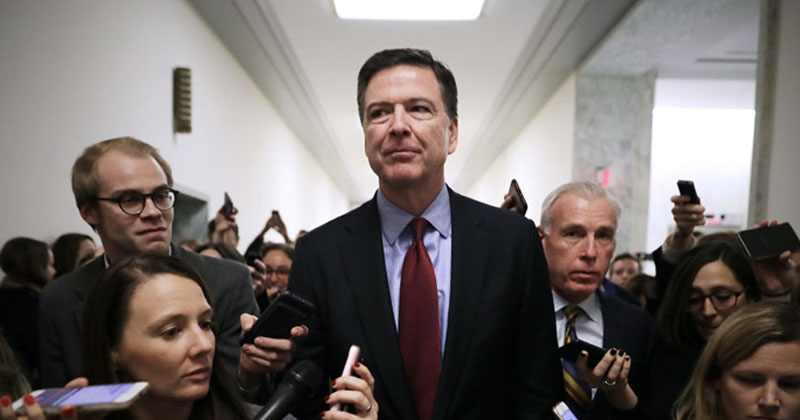 Fired ex-FBI Director James Comey was conducting his own “covert operation” against President Trump in 2017 despite the fact no probable cause existed to do so and assurances to Trump that he was not being probed, according to sources familiar with the DOJ Inspector General’s report into FBI misconduct.

The sources told RealClearInvestigations that Comey had misled Trump on the FBI’s supposed Russia counterintelligence investigation, which likely precipitated his firing by Trump that led to the appointment of Special Counsel Robert Mueller.

“They said Horowitz has examined high-level FBI text messages and other communications indicating Comey was actually conducting a ‘counterintelligence assessment’ of Trump during that January 2017 meeting in New York.”

Additionally, Comey embedded an agent in the White House to keep tabs on Trump and his associates despite no probable cause, the sources claim.

“In addition to adding notes of his meetings and phone calls with Trump to the official FBI case file, Comey had an agent inside the White House who reported back to FBI headquarters about Trump and his aides, according to other officials familiar with the matter.”

Federal prosecutor Andrew McCarthy believes Comey didn’t want to convey to the public what he had told Trump privately – that he wasn’t being investigated – because in reality the FBI was trying to build a case against Trump anyway for political purposes.

“They were hoping to surveil him incidentally, and they were trying to make a case on him,” McCarthy said. “The real reason Comey did not want to repeat publicly the assurances he made to Trump privately is that these assurances were misleading. The FBI strung Trump along, telling him he was not a suspect while structuring the investigation in accordance with the reality that Trump was the main subject.”

FBI counterintelligence agent and lawyer Mark Wauck agreed with McCarthy that the FBI lacked the legal standing to conduct such an operation against Trump.

“They had no probable cause against Trump himself for ‘collusion’ or espionage,” Wauck said. “They were scrambling to come up with anything to hang a hat on, but had found nothing.”

The Department of Justice Inspector General Michael Horowitz was reportedly supposed to present the evidence of his year-long investigation into Deep State FISA abuse and FBI misconduct this summer, but it may be pushed to the fall due to the “high volume of information” he collected that needs to undergo classification review.