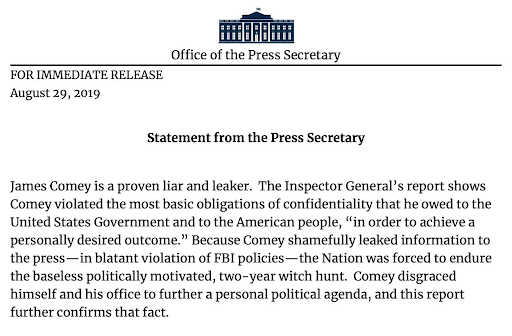 Update (1455ET): The White House has issued an extremely strong statement on the Inspector General’s report:

Update (1405ET): President Trump has taken a momentary break from helping Fla. Gov. Ron DeSantis batten down the hatches ahead of Hurricane Dorian’s weekend landfall – and from doing everything he can to pump the market – by taking a shot at disgraced former FBI director James Comey following the Thursday publication of the DoJ’s IG report, which confirmed that Comey violated both DoJ policy and the law, by leaking the contents of his memos to the press.

“Perhaps never in the history of our Country has someone been more thoroughly disgraced and excoriated than James Comey in the just-released Inspector General’s Report,” Trump tweeted. “He should be ashamed of himself!”

Perhaps never in the history of our Country has someone been more thoroughly disgraced and excoriated than James Comey in the just released Inspector General’s Report. He should be ashamed of himself!

Of course, as we mentioned below, Comey doesn’t see it that way. But maybe, someday, he’ll at least acknowledge that he acted rashly – and put his subordinates in a very awkward position – by deciding to leak the memos as an unabashed strategy to try and undermine the newly inaugurated president of the country he claims to love so dearly.

In a long-awaited report released Thursday morning, the DOJ’s inspector general revealed that former FBI Director James Comey’s handling of the memos he took from meetings with President Trump before he was unceremoniously fired in early 2017 violated department policy and the law when he shared them with a longtime confidant, who then leaked their contents to the press.

Fox News Host Sean Hannity warned that Comey should be worried about facing the repercussions for his decision to leak the contents of the memos.

“Without a doubt…[Comey] should be sweating a lot tonight about what might be in those reports. This report is expected to be the tip of the iceberg when it comes to Jim Comey.”

The planetary civil war against nation-states and multinational corporations allied with China has begun! This is unprecedented – a House representative is publicly calling for the complete stand-down of the United States’ national sovereignty!

The IG’s office had referred Comey for potential prosecution earlier this summer based on his handling of the memos, CNN reported. But the DoJ declined to bring a case, in part because prosecutors didn’t believe there was evidence to show Comey knew and intended to violate laws pertaining to the handling of classified information.

Still, as Hannity said, things are “not looking good…for Mr. Super Patriot, a guy that knows better than us…we are told that the report will strongly rebuke the disgraced former FBI director, document his utter lack of candor. That means lying,” Hannity said.

As an earlier media report reminded us, the Comey report is separate from a larger report about how the DoJ handled the Russia investigation, though it’s still not clear why the separate report is needed.

Comey infamously took created the memos after meetings with President Trump where Trump purportedly asked him to go easy on former National Security Advisor Michael Flynn. Comey then leaked the contents of these memos to a friend through a trusted confidant, helping to spur the launch of the Russia probe.

In a series of tweets replying to the report, Comey tried to spin the report’s findings, highlighting a section of the report that was favorable to his narrative.

DOJ IG "found no evidence that Comey or his attorneys released any of the classified information contained in any of the memos to members of the media." I don’t need a public apology from those who defamed me, but a quick message with a “sorry we lied about you” would be nice.

And to all those who’ve spent two years talking about me “going to jail” or being a “liar and a leaker”—ask yourselves why you still trust people who gave you bad info for so long, including the president.

Here are some highlights from the report, starting with the conclusion:

Congress has provided the FBI with substantial powers and authorities to gather evidence as part of the FBI’s criminal and counterintelligence mission. The FBI uses these authorities every day in its many investigations into allegations of drug trafficking, terrorism, fraud, organized crime, public corruption, espionage, and a host of other threats to national security and public safety. In the process, the FBI lawfully gains access to a significant amount of sensitive information about individuals, many of whom have not been charged, may never be charged, or may not even be a subject of the investigation. For this reason, the civil liberties of every individual who may fall within the scope of the FBI’s investigative authorities depend on the FBI’s ability to protect sensitive information from unauthorized disclosure.

As Comey himself explained in his March 20, 2017 testimony before the House Permanent Select Committee on Intelligence, he was unable to provide details about the nature or scope of the FBI’s ongoing investigation into Russian interference in the 2016 presidential election because the FBI is very careful in how we handle information about our cases and about the people we are investigating…. Our ability to share details with the Congress and the American people is limited when those investigations are still open, which I hope makes sense. We need to protect people’s privacy…. We just cannot do our work well or fairly if we start talking about it while we’re doing it.

However, after his removal as FBI Director two months later, Comey provided a copy of Memo 4, which Comey had kept without authorization, to Richman with instructions to share the contents with a reporter for The New York Times. Memo 4 included information that was related to both the FBI’s ongoing investigation of Flynn and, by Comey’s own account, information that he believed and alleged constituted evidence of an attempt to obstruct the ongoing Flynn investigation; later that same day, The New York Times published an article about Memo 4 entitled, “Comey Memo Says Trump Asked Him to End Flynn Investigation.”

The responsibility to protect sensitive law enforcement information falls in large part to the employees of the FBI who have access to it through their daily duties. On occasion, some of these employees may disagree with decisions by prosecutors, judges, or higher ranking FBI and Department officials about the actions to take or not take in criminal and counterintelligence matters. They may even, in some situations, distrust the legitimacy of those supervisory, prosecutorial, or judicial decisions. But even when these employees believe that their most strongly-held personal convictions might be served by an unauthorized disclosure, the FBI depends on them not to disclose sensitive information.

Former Director Comey failed to live up to this responsibility. By not safeguarding sensitive information obtained during the course of his FBI employment, and by using it to create public pressure for official action, Comey set a dangerous example for the over 35,000 current FBI employees—and the many thousands more former FBI employees—who similarly have access to or knowledge of non-public information. Comey said he was compelled to take these actions “if I love this country…and I love the Department of Justice, and I love the FBI.” However, were current or former FBI employees to follow the former Director’s example and disclose sensitive information in service of their own strongly held personal convictions, the FBI would be unable to dispatch its law enforcement duties properly, as Comey himself noted in his March 20, 2017 congressional testimony. Comey expressed a similar concern to President Trump, according to Memo 4, in discussing leaks of FBI information, telling Trump that the FBI’s ability to conduct its work is compromised “if people run around telling the press what we do.” This is no doubt part of the reason why Comey’s closest advisors used the words “surprised,” “stunned,” “shocked,” and “disappointment” to describe their reactions to learning what Comey had done.

We have previously faulted Comey for acting unilaterally and inconsistent with Department policy.103 Comey’s unauthorized disclosure of sensitive law enforcement information about the Flynn investigation merits similar criticism. In a country built on the rule of law, it is of utmost importance that all FBI employees adhere to Department and FBI policies, particularly when confronted by what appear to be extraordinary circumstances or compelling personal convictions. Comey had several other lawful options available to him to advocate for the appointment of a Special Counsel, which he told us was his goal in making the disclosure. What was not permitted was the unauthorized disclosure of sensitive investigative information, obtained during the course of FBI employment, in order to achieve a personally desired outcome.

If he wanted to force the appointment of a special counsel, the report found that Comey had other lawful options besides leaking to the press, yet, he chose to ignore them.

Comey’s unauthorized disclosure of sensitive law enforcement information about the Flynn investigation merits similar criticism. In a country built on the rule of law, it is of utmost importance that all FBI employees adhere to Department and FBI policies, particularly when confronted by what appear to be extraordinary circumstances or compelling personal convictions. Comey had several other lawful options available to him to advocate for the appointment of a Special Counsel, which he told us was his goal in making the disclosure. What was not permitted was the unauthorized disclosure of sensitive investigative information, obtained during the course of FBI employment, in order to achieve a personally desired outcome. The OIG has provided this report to the FBI and to the Department of Justice Office of Professional Responsibility for action they deem appropriate.

Even members of Comey’s leadership team were “shocked” by the then-director’s actions.

IG: Members of Comey’s senior leadership team used the adjectives “surprised,” “stunned,” “shocked,” and “disappointment” to describe their reactions to learning that Comey acted on his own to provide the contents of Memo 4, through Richman, to a reporter

As Ryan Saavedra pointed out, the IG found that Comey set a “dangerous example” for the tens of thousands of FBI employees working under him…

DOJ IG: "Comey set a dangerous example for the over 35,000 current FBI employees—and the many thousands more former FBI employees—who similarly have access to or knowledge of non-public information" https://t.co/MiGXXDb0VL

…And the “bottom line”, as one reporter put it:

Bottom line: “The OIG has provided this report to the FBI and DOJ-OPR for any action they deem appropriate.” pic.twitter.com/JvT4HaFmLC

Even CNN conceded that the report was “damning” for Comey.

CNN says the IG report on James Comey was very "damning" for him as he violated FBI policies pic.twitter.com/3MGzhM9e8B

Several Twitter wits sifted through the reports findings pertaining to Comey memos 1 through 7.

McCabe's FBI then initiates a classification review of Comey's memos which McCabe would be seeing for the first time! I wonder if he found anything incriminating him & the coup plotters in those memos! pic.twitter.com/Wx17BVRKhx

After Comey left, the FBI classified small amounts of information in Memos 2 & 7 in June of 2017. SO he leaked the memos (1 redacted) before they were classified.

So we get to Hillary's 1st alibi, they weren't classified at the time! pic.twitter.com/PI6Ge1BDfg