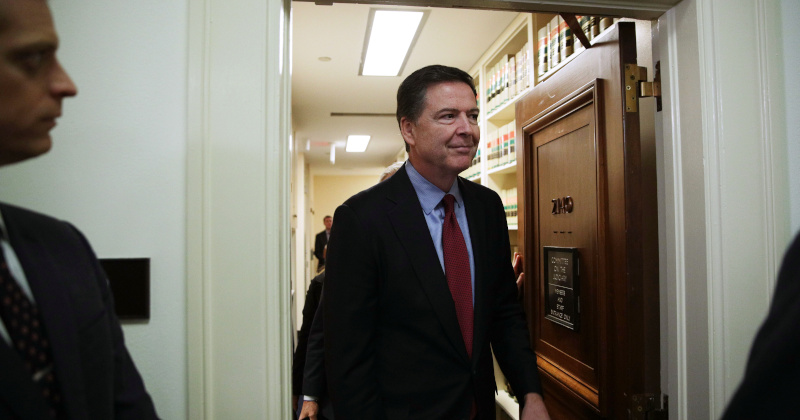 It was Comey who told President Barack Obama and other administration officials that “incoming NSA Flynn is speaking frequently with Russian Ambassador Kislyak” in a meeting documented in the January 2017 memo by National Security Advisor Susan Rice, the unredacted first page of which was obtained by CBS on Tuesday.

The FBI director admits he “has no indication thus far that Flynn has passed classified information to Kislyak,” and no real basis for his insistence that the probe must go on.

The only thing backing his hunch that the meetings between the general and the Russian diplomat “could be an issue”?

“The level of communication is unusual,” Comey tells Obama, according to Rice, hinting that the National Security Council should “potentially” avoid passing “sensitive information related to Russia” to Flynn.

The FBI director did not elaborate on what is supposed to be “unusual” about an incoming foreign policy official speaking with a Russian counterpart, especially in the midst of what was then a rapidly-unraveling diplomatic relationship between the two countries with Obama expelling 35 Russian diplomats and imposing sanctions over alleged-but-never-substantiated “election interference.” Given the circumstances, an absence of communication might have been more unusual. But the timing is certainly auspicious.

Rice, Flynn’s predecessor who authored the memo, relates that the January 5 meeting followed “a briefing by [Intelligence Committee] leadership on Russian hacking during the 2016 Presidential election.”

The previous day, the FBI field office assigned with investigating Flynn attempted to close the case against him, called CROSSFIRE RAZOR, after having found “no derogatory information” to justify continued inclusion in the overarching CROSSFIRE HURRICANE probe (the “Russian collusion” investigation).

They were blocked from doing so by Agent Peter Strzok, who added that the orders to keep the investigation going came from the “7th floor” – i.e. agency leadership. The Flynn investigation had been underway since August, beginning the day after Strzok discussed an ‘insurance policy’ that was supposed to keep then-candidate Donald Trump out of office with Comey’s deputy, Andrew McCabe.

While Comey describes his probe of Flynn as “proceeding ‘by the book’” after Obama repeatedly stresses he wants only a “by the book” investigation – both parties presumably hoping to avoid exactly the sequence of revelatory events that are currently unfolding – recently-unsealed documents from the case against Flynn indicate the general was entrapped, with the FBI’s goal being to “prosecute him or get him fired” with an ambush-style interview.

They got both their wishes – after agents tricked him into sitting for questioning without a lawyer present, Flynn was accused of lying about his contacts with Kislyak, fired from his post in the White House, and subsequently pled guilty to lying to a federal agent.

The Department of Justice has dropped its charges against Flynn, citing gross misconduct and abuse of power at the FBI, which it claims had no basis for launching its investigation.

However, US District Judge Emmet Sullivan has attempted to block the dismissal, appointing a retired judge as independent prosecutor to both argue against the Justice Department’s move and pursue perjury charges against Flynn – essentially charging him with lying about lying.

On Tuesday, Flynn’s attorney filed a writ of mandamus with the US Court of Appeals for the DC Circuit, urging them to force Sullivan to step aside and allow the dismissal of the charges.