With police stepping up security at arenas showing ‘The Dark Knight Rises’ after last night’s tragic ‘Batman’ massacre in Colorado, liberty-minded Twitter users took to the web today to express concerns that the incident could serve as an excuse to station TSA agents at movie theaters in major cities. 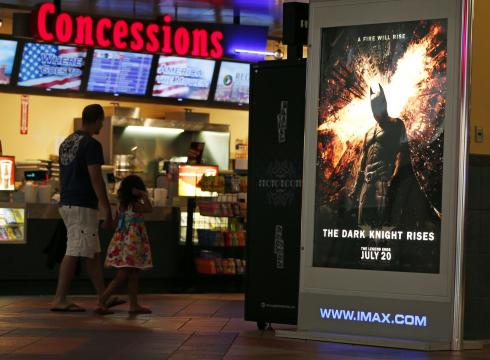 The NYPD is stepping up patrols at movie theaters in New York following last night’s shooting which killed 12 people.

The National Association of Theatre Owners also issued a statement saying they are working with police to review security procedures.

Thousands of Twitter users took to the social media website to share their fears that the widely-loathed Transportation Security Agency could eventually be used to search through personal possessions and even conduct pat downs on moviegoers.

“I could see it now… Catching a movie is gonna be like going through the God-awful TSA,” wrote Michael Trevino.

“They’re gonna start having TSA type security at movie theaters. Means the costs of a ticket will probably be even higher,” wrote Andross.

“I was seriously full on molested by TSA in London coming back from Italy & now we will probably start having it in movie theaters,” warned Victoria Lewis.

“If they implement some TSA style bull**** in theaters because of this, I will never step foot in another one. Promise,” added George Trello.

While fears of TSA goons popping up at movie theaters were largely framed in a negative context, on one forum, a poster openly welcomed the idea.

“In light of what happened last night, seems it like a good idea to expand TSA to provide security at malls, theaters, and grocery stores, etc. We were going to take our kids to the movies tonight, but not now!” he wrote.

Twitter user ‘Kelli’ also called for TSA to be at movie theaters.

“We need the TSA security check point at the movie theaters now…I never felt safe been in room full of strangers anyways,” she wrote.

“We’d all be much safer if the TSA set up screening zones at movie theater entrances now. Right?” asked Boing Boing.

TSA agents have already long since expanded outside of airports and now patrol numerous transportation hubs as well as highways.

Last year, TSA agents were also used as security for prom night at several Santa Fe schools, during which two girls complained that they were groped.

TSA workers were also recently exported to London to provide extra security screening for travelers arriving for the Olympic Games.