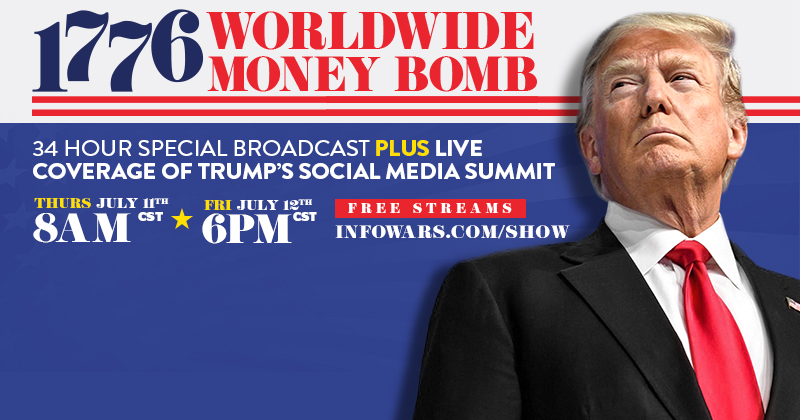 WATCH BELOW and at infowars.com/show.

Think about what just transpired over the past few years.

Worldwide, people have rejected the concept of world government in favor of keeping power concentrated at the local and national levels.

And globalists have been pushed out of office at a tremendous pace.

But none of these tactics are going to work in the long-run as long as we stay on course.

To illustrate this important fact, we’re launching a 34-hour broadcast starting at 8AM Central on Thursday, July 11 and obviously pushing on until Friday!

And, to celebrate freedom and patriotism worldwide, we’re launching a BRAND NEW special to coincide with our broadcast at InfowarsStore.com.

Enjoy 75% off on more than 30 items, and get your favorite shirts and Infowars Life products for just $17.76!

So tune in starting Thursday, July 11 and please share this link!

3pm to 6pm — The War Room with Will Johnson

10pm to Midnight – Will Jonson

Midnight to 2am — Savanah Hernandez

6am to 8am — Paul Joseph Watson

3pm to 6pm — The War Room with Will Johnson