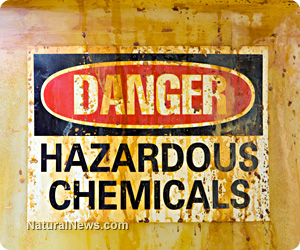 They are literally all around us, yet most people are unaware of their invasive presence: chemicals, and especially the hormone-mimicking variety. Everything from plastic bottles and receipts to clothing and furniture is silently teeming with them, and one prominent New York Times (NYT) journalist suggests that they could be humanity’s undoing.

Also known as endocrine-disrupting chemicals (EDCs), these hormone-mimicking compounds are increasingly turning up in scientific studies as a leading cause of many common conditions, including infertility, diabetes, obesity and cancer. Both males and females throughout the animal kingdom appear to be suffering genital deformities and other sex-related problems because of them, and males in particular are losing, well, their maleness.

While it was previously believed that these and other adverse effects were limited primarily to animals, emerging science continues to show that humans also stand to suffer from EDC exposure. For instance, Philip Landrigan, a professor of pediatrics at the Mount Sinai School of Medicine in New York, told the NYT that he has seen a doubling in cases of hypospadias, a misplacement of the urethra, in newborn boys, which he believes is a result of EDCs.

“Endocrine disruptors are everywhere,” writes Nicholas D. Kristof for the NYT. “They’re in thermal receipts that come out of gas pumps and ATMs. They’re in canned foods, cosmetics, plastics and food packaging. Test your blood or urine, and you’ll surely find them there, as well as in human breast milk and in cord blood of newborn babies.”

Hormonal damage from EDCs can take decades to show up

All of this is highly concerning, yet government regulators have done little to address the problem of EDCs. Besides banning the EDC bisphenol A (BPA) from baby bottles and “sippy cups” last year, the U.S. Food and Drug Administration (FDA) has all but disregarded numerous pleas by prominent members of the scientific community to take swift action against EDCs in defense of public health.

In a letter to the FDA, The Endocrine Society (TES) scolded the agency for failing to look at the full scope of scientific data on EDCs like BPA, which includes studies showing that even very low levels of exposure can cause harm.

“We encourage the FDA to consider the low-dose studies examining important endocrinological endpoints when making policies regarding BPA or other endocrine-disrupting chemicals,” stated Janet E. Hall, M.D., president of TES. “Many of the neglected studies of low-dose effects are well designed, heavily reviewed, NIH-funded work. The results of this research show significant health effects at exposures substantially lower than those deemed safe by the FDA.”

Many have also expressed concerns that the FDA has repeatedly refused to evaluate the long-term effects of EDCs, which can take decades to emerge. The synthetic estrogen drug DES, for instance, which is now banned, was once routinely given to pregnant women to help prevent morning sickness and miscarriage. The drug appeared to cause no harm initially but was later determined to cause both vaginal and breast cancer many years down the road.

The same is true for perfluorooctanoic acid, or PFOA, an EDC commonly added to non-stick cookware, microwaveable popcorn bags and some carpet-cleaning solutions. A 2012 study published in the journal Environmental Health Perspectives (EHP) found that prenatal exposure to PFOA triples the likelihood that an unborn child will grow up to be obese. And the same year, a 78-page analysis of general EDC exposure published in the journal Endocrine Reviews found that low-dose exposure to a variety of EDCs can cause major long-term health problems.