Kindergarten students in Columbia, Ohio are being asked to solve a math problem that does not allow them to provide the correct answer. 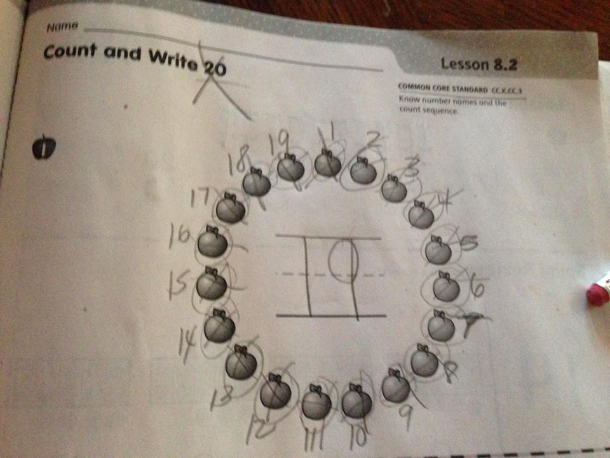 Mina Boyd, whose kindergartener came home with a Common Core math workbook this week, noticed her daughter’s unusual frustration regarding one lesson entitled “Count and Write 20.”

“Count and tell how many pieces of fruit. Write the number,” the assignment asks.

“They ask her to count and write 20. So she counts, counts again, and again, and says ‘mom, there’s only 19,'” Boyd explained on a Facebook post.

According to Kyle Olson, founder of the Common Core watchdog site Education Action Group, the workbook is produced by a well known publisher with deep Common Core ties.

Boyd worries about the integrity of her child’s homework given the fact that such a major mistake was made on a math problem for five-year-old children.

“I’m just glad she was smart and said they messed up. If they are going to enforce this then they better double and triple check their work books so they are accurate,” Boyd said.

Although some have argued that the small black apple with the “1” inside represents the first apple to be counted, a picture from the same page shows a correct count on every other problem. 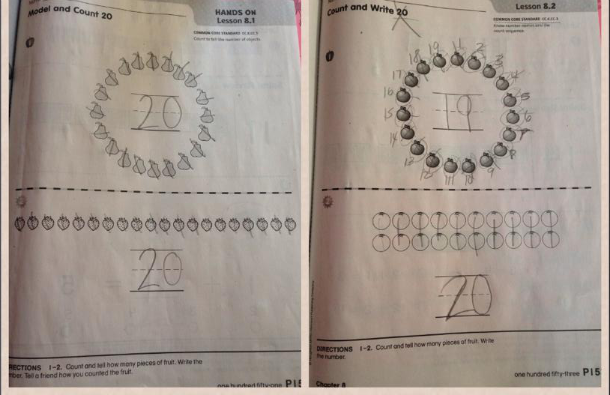 While the assignment is likely a mistake, the Common Core curriculum has outright praised and rewarded children who provide false answers before.

Just last year in a Chicago suburb, a Common Core curriculum coordinator told parents that kids could give the wrong answer to math problems and still be right if they could explain their answer.

“Even if they said, ’3 x 4 was 11,’ if they were able to explain their reasoning and explain how they came up with their answer really in, umm, words and oral explanation, and they showed it in the picture but they just got the final number wrong, we’re really more focused on the how,” the coordinator stated.

Unfortunately, an increasing amount of school assignments, some not associated with Common Core, are giving young students false information in history as well.

Just last year, a Common Core-aligned history textbook was revealed to state that Americans only have the right to keep and bear arms in a state militia.

That same year, sixth graders in Arkansas were lead taught that the government can give or take fundemental rights through an assignment that asked them to “revise” the “outdated” Bill of Rights.

A workbook handed out to seventh grade students in Springfield, Ill. last month stated that all Americans must register their firearms in order to have a Second Amendment right.