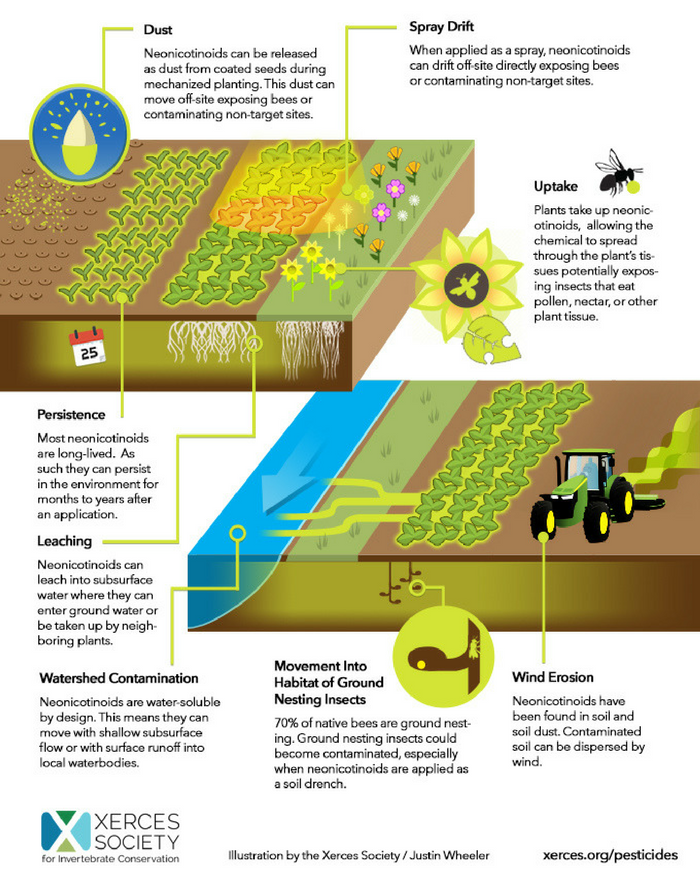 Researchers in the United Kingdom recently examined how bumblebee queens are affected by neonicotinoid pesticides, finding that one of the most common neonics compromises the queens’ ability to lay eggs, putting her colony at risk for extinction. [1]

Neonicotinoids, or neonics, are applied as a coating on the seeds of corn, soybeans, canola, and other crops. These “systemic” pesticides spread throughout the growing plants, winding up in pollen. Traces of neonicotinoids have been found in the U.S. in everything from honey samples to drinking water. [2]

In a laboratory experiment, a group of researchers from Royal Holloway University of London fed bumblebee queens a syrup containing traces of a widely-used neonic called thiamethoxam in amounts similar to what bees living near fields of neonic-treated canola might be exposed to.

Bumblebee queens exposed to thiamethoxam were 26% less likely to lay eggs compared with queens that were not exposed to the pesticide.

Nigel Raine, one of the scientists who conducted the experiment, said:

“Without the queen laying eggs, there is no colony.”

The drop in bumblebee reproduction in the study was so substantial that the researchers said that wild bumblebee populations exposed to neonicotinoids could decline to the point that they eventually die out.

The chance of colony collapse is at least 28%, according to the scientists. [2]

“To me, based on the data we have, it seems like quite a big impact.”

However, because the experiment was done in a lab, it’s unclear just how harmful the pesticide exposure is in the wild, compared to other threats facing bees, such as habitat loss and the disappearance of wildflowers that bees rely on for food.

Starting a colony is already a daunting task for bumblebee queens. The queens shed about 80% of their fat reserves over the winter. Those lucky enough to survive face parasites, predators, bad weather, and a lack of food. [1]

In 2013, the EU placed a temporary moratorium on neonicotinoids on a number of crops. It is now contemplating a permanent ban.

A few U.S. states have banned neonics, including Maryland. The EPA has said it will not review the registration for neonicotinoids until 2018.

Threats to honeybees get the most press coverage, but there are some 20,000 bee species, and all of them are vital to the food chain. Bees are responsible for pollinating about 1/6 of the world’s flowering plants, and about 400 different agricultural plants. Of the top 100 food crops grown worldwide, 70 of them depend on bees and other pollinators, accounting for about 90% of the world’s nutrition. [1] [3]