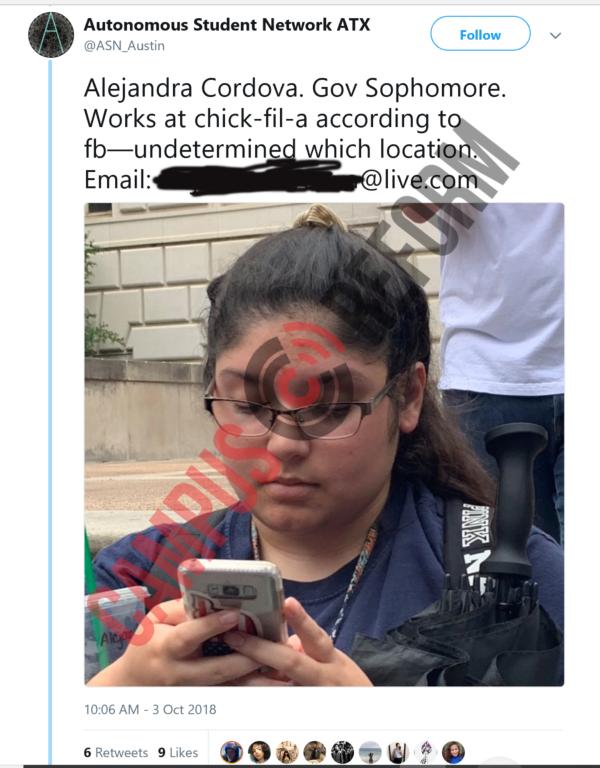 The Autonomous Student Network in Austin, Texas (ASN), whose website encourages “anarchy” and “communism,” posted the information in a Twitter thread that linked to a blog entitled “THE YCT: NOT JUST RACISTS, BUT RAPE APOLOGISTS TOO!”

Here are all the YCT members identified from yesterday, including contact info, some jobs, & more. there’s also info on the UT admins who enabled them & how you can contact them.

“Yesterday, members of the Young Conservatives of Texas tabled with pro-Kavanaugh & anti-#MeToo signs on West Mall. They were swiftly confronted by a growing crowd of students, who made signs in protest, destroyed YCT signs, and chanted slogans like ‘we believe survivors!’” the ASN stated in an accompanying blog post. “With women of color taking the initiative, the protests grew increasingly militant and also confronted the administration and the police enabling the YCT rally. Within two hours, the YCT had fled in the face of the massive backlash.”

The group responded to a Tuesday incident on campus during which pro-Kavanaugh protesters had their signs stolen and destroyed.

ASN also called out administrators like Senior Associate Dean of Students Douglas Garrard, claiming that Garrard “threatened to use cops–armed men with guns with the right to imprison or kill–against survivors and other students protesting rape apologia.”

The ASN encouraged people to harass the staff and conservative students using information the group uncovered, stating that students at UT-Austin should “expect” to organize harassment campaigns.

“We encourage people to use these to wage campaigns and ensure there are repercussions for the actions they took yesterday. Demonstrating in defense of rapists and making campus hostile to survivors should not go unanswered. At the same time, students should prepare for backlash,” the ASN blog states. “Already, one student is facing harassment and threats because of a video circulating from yesterday. Students should expect to organize solidarity campaigns against targeted harassment, and begin securing their own information to avoid harassment.” 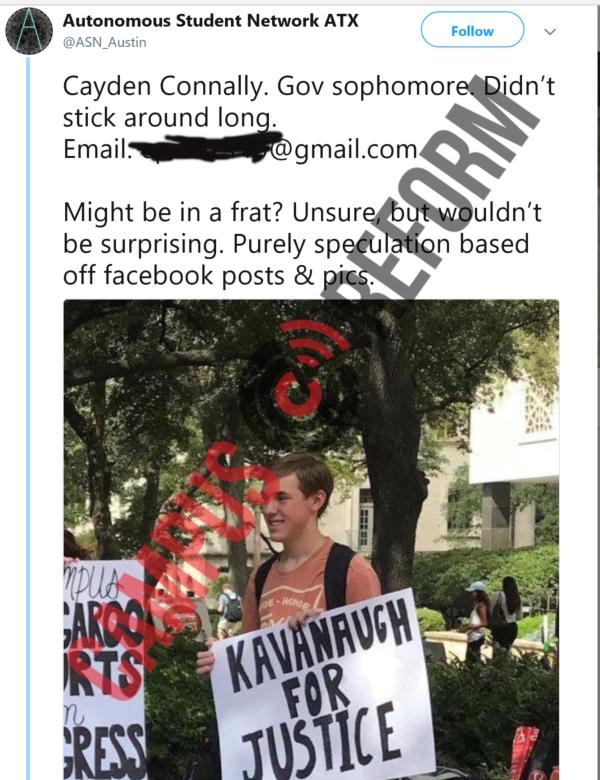 “Don’t let UT or the YCT forget about this. Make them learn that their actions have consequences,” the ASN stated on Twitter. “Let’s hold UT admins accountable and get the YCT off our campus!” 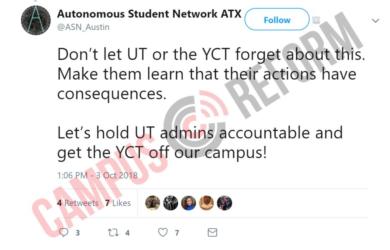 UT-Austin YCT chairman Saurabh Sharma told Campus Reform that the group will not be silenced.

“We will not be cowed by far-left thugs attempting to silence our right to stand in solidarity with Judge Kavanaugh,” Sharma said.

“No member of the university community should be targeted. University Police are reviewing the incident for potential criminal violations,” Bird said.

UT-Austin police told Campus Reform Wednesday that an investigation into the original protest disruption was ongoing.