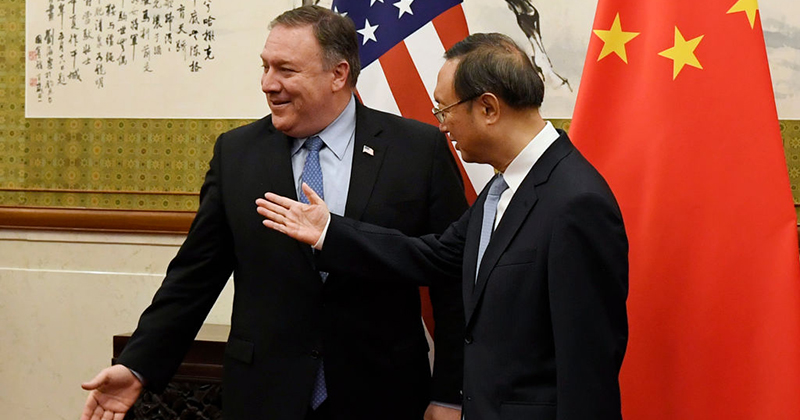 The Chinese government has labeled US Secretary of State Mike Pompeo ‘sinister’ and ‘an enemy of world peace’, saying that Pompeo’s demands for access to the Wuhan Institute of Virology and other Chinese bio-labs should be ignored.

Declaring Pompeo to be “the worst U.S. secretary of state in its history,” state media The Global Times published a piece accusing him of “a string of violent attacks” on China.

“He is the senior US official who’s the most active in attacking the CPC [Communist Party of China], which reflects extreme hostility against socialist China and reveals his malicious goal to push the U.S. and China into strategic rivalry,” the propaganda piece reads.

“The former top intelligence official is steering the US Department of State into becoming the Central Intelligence Agency,” it continues, referring to Pompeo, who has said that China is refusing to co-operate with US investigations into the coronavirus origin.

“It’s a pity that at a time when the world is facing turbulence and great uncertainties from the novel coronavirus, the position of secretary of state has been occupied by a person of a sinister nature,” the piece derides.

Alex Jones breaks down Bill Gates’ recent public comments praising China over America when asked about China being at fault for spreading the Covid-19 pandemic.

In another propaganda article, The People’s Daily, the official newspaper of the Communist Party of China, called Pompeo’s assertion that the virus may have leaked from the Wuhan lab “groundless and irresponsible” and “totally against science.”

“Seeking the origin of the virus is a serious issue that calls for a science-based survey,” the piece declares, urging that “Pompeo’s wanton accusations, which lack any credible evidence, have only damaged his country’s international reputation.”

Meanwhile, the Chinese Foreign Ministry has continuously claimed that the virus originated in a US military lab, without offering any evidence.

The theory, which has been repeated by state media, and even by US based conspiracy theorists, seems to surround US Army reservist Maatje Benassi as ‘patient zero’ of COVID-19 in China, with claims she brought the virus to Wuhan during the Military World Games, where she was competing as a cyclist.

Benassi, a civilian employee at the US Army’s Fort Belvoir in Virginia, has never tested positive or exhibited any symptoms of the virus, and has said she’s now living in fear for her life.