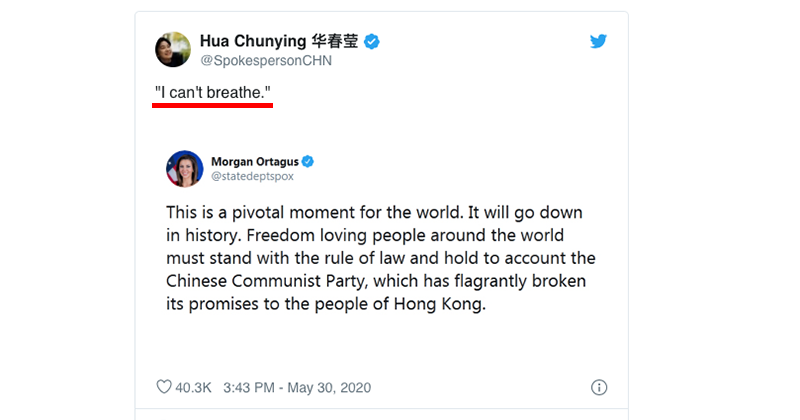 As America burns at the hands of ANTIFA extremists who have latched onto the George Floyd backlash, Chinese and Iranian officials took glee in the unrest and violence that is being perpetrated on the streets of major US cities.

Communist party officials have been keen to use the situation in the US to somehow justify China’s brutal crackdown on protests in Hong Kong.

Chunying also retweeted a segment aired on RT that labelled as ‘hypocritical’ the way Washington categorises Hong Kong protesters as heroes, yet the current US “protesters” as thugs:

The difference is, of course, that those in Hong Kong are protesting a brutal communist regime crushing their freedom, where as in the US it’s mainly looting opportunists stealing TV’s from Target, and chicken necked Antifa kids smashing up everyday people’s businesses and attacking them in the process.

There is no hypocrisy in calling them thugs.

While censoring the US President, Twitter is fine with allowing Iran’s ‘Supreme Leader’ and its Foreign Ministry to post this kind of shit:

If you're dark-skinned walking in the US, you can't be sure you'll be alive in the next few minutes. #ICantBreathe #BlackLivesMatter pic.twitter.com/nwR8jeUPpg

To those of us who do: it is long overdue for the entire world to wage war against racism.

Seriously? From a country that viciously oppresses all minorities, sanctions brutally beating women if they dare to uncover their heads, and endorses the execution of people for their sexuality.