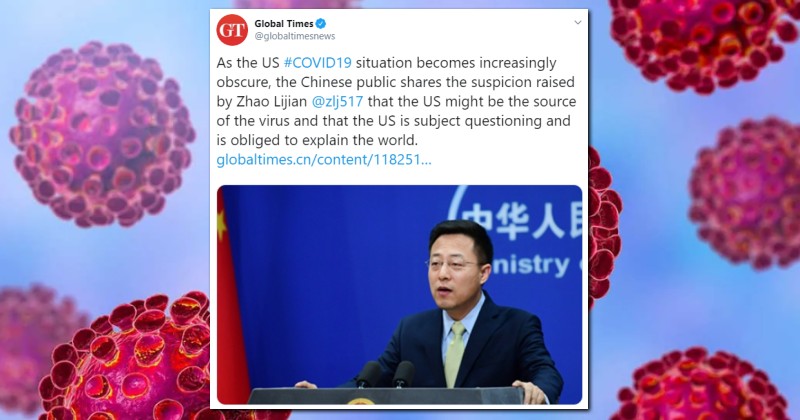 Global Times, the news outlet that serves as a mouthpiece for China’s ruling Communist Party has endorsed a claim by the spokesman for Beijing’s Foreign Ministry that the United States may have been responsible for the coronavirus outbreak.

As we highlighted yesterday, China’s Foreign Ministry Zhao Lijian spokesman tweeted, “It might be US army who brought the epidemic to Wuhan,” adding “Be transparent! Make public your data! US owe us an explanation!”

After having refused to distance itself from Lijian’s remarks, the Chinese government is now all but endorsing them.

“As the US #COVID19 situation becomes increasingly obscure, the Chinese public shares the suspicion raised by Zhao Lijian @zlj517 that the US might be the source of the virus and that the US is subject questioning and is obliged to explain the world,” tweeted the Global Times above Lijian’s original tweet.

As the US #COVID19 situation becomes increasingly obscure, the Chinese public shares the suspicion raised by Zhao Lijian @zlj517 that the US might be the source of the virus and that the US is subject questioning and is obliged to explain the world. https://t.co/aYXDh3Xc1H https://t.co/9W9v5ysufh pic.twitter.com/bbeqiy42iu

The article linked from the tweet goes on to assert that the Trump administration blaming China for coronavirus is “part of an information war embedded with racial discrimination and malicious accusations.”

Global Times is notorious for being a state run media outlet that reflects the opinions of China’s Communist government.

The claim that China is not responsible for the COVID-19 outbreak despite the virus originating in Wuhan has also been supported by the mainstream media in the U.S., which has characterized descriptions of coronavirus as the “Wuhan virus” or a “foreign virus” as racist and xenophobic.

Tucker Carlson also mentioned Lijian’s claim on his Fox News show last night and emphasized how the U.S. media has bolstered Chinese propaganda that America somehow shares the blame for the coronavirus outbreak.