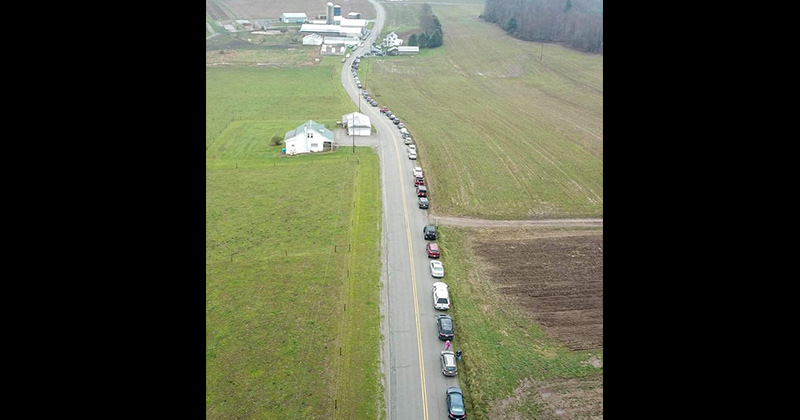 Local communities are flocking to local farms and butchers to help ease problems with the supply chain, and because supermarkets are limiting how much meat customers can purchase.

As grocery stores like Kroger, Costco and Giant Eagle or fast-food restaurants like Wendy’s begin rationing meat and meat processing plants across the country shut down due to coronavirus, citizens are rapidly seeing rumors of a meat shortage become reality.

We are weeks, not months, away from farmers euthanizing animals that would have been sold for meat/food. Also, fruits and vegetables are going to rot in the fields. A drastic change in policy this week could ameliorate this inevitability.

Then, last week, a rancher went viral online after releasing a video warning the US beef supply will plummet if ranches start culling harvest-ready cattle due to shut-down processing plants not taking livestock.

“They are preparing us to depopulate the fat cattle ready to harvest because of a bottleneck created by the effects of Covid,” the rancher from Archer Co., Texas, warned. “…We are in trouble. Our food supply is in trouble.”

In response to this impending crisis, Americans are already helping farmers and ranchers by skipping the big chains and going directly to the source.

For example, the Whoa Nellie Dairy Farm in Fayette County, Pennsylvania decided to bottle their own milk instead of dumping it out and sold out of 30 gallons within hours.

“My husband and I just came up with that mission to try to bottle it all. Even though we knew we had a tiny pasteurizing system, we just thought we’d make it a mission to get it all bottled without dumping any,” said owner Mary Beth Brown.

This is America ! 🇺🇸Whoa Nellie Dairy Farm, PA decided to bottle their own milk instead of dumping it out . Community responded 👇👇They sold out in matter of hours . PS: They’ve also been supplying milk to ppl in need ! Way to go ! @realDonaldTrump pic.twitter.com/7YXtjIQXIa

A similar line of cars was seen in Moses Lake, Washington where potato farmers were donating produce originally grown for restaurants.

Today in Moses lake, farmers gave away potatoes grown for restaurants. Hundreds of cars line up. Making the best of a horrible situation. Thank you Washington potato growers! 🥔❤️ pic.twitter.com/FIzfF4AD56

Another long line of cars was spotted in Ritzville, Washington where potato farmers donated excess spuds.

HAPPENING NOW: A massive line has formed in Ritzville where potato farmers are giving away 20 tons of potatoes. Due to the pandemic, farmers' freezers are overstocked with potatoes normally sold to the food industry. 📹: @Kaitlin_Knapp1 pic.twitter.com/e0r3NxK1Bm

Congressman Thomas Massie, the same one who warned of shortages a month before they hit, has introduced the PRIME Act in an attempt to prevent America from wasting its meat supply.

“Thousands of animals will be killed & wasted today instead of feeding families. Meanwhile, Congress takes an extended vacation,” he writes. “Farmers are going broke and shelves are going empty. Instead of just granting immunity from (American!) employee lawsuits to foreign-owned companies, why not put America first?”

Because it’s difficult to receive USDA approval amid the coronavirus pandemic and ongoing meat supply chain issues, the act would increase the meat supply and a considerable amount, thus reducing costs for consumers.

Massie, a rancher who owns 50 head of cattle on his off-the-grid farm in northeast Kentucky, touched on the meat shortage crisis on the Todd Starnes Show on Tuesday: