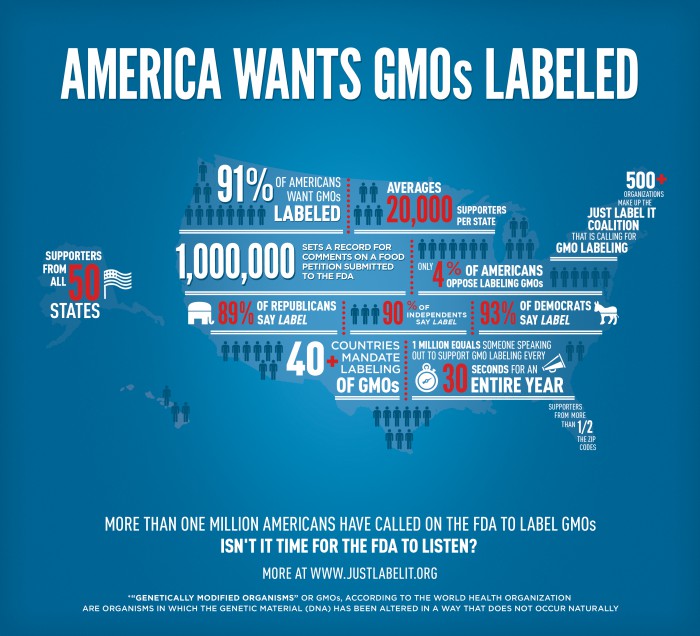 Starting July 1, Vermont will require all foods containing genetically modified (GM) ingredients to be labeled under Act 120, making it the first state in the U.S. to enact such a law. The state’s attorney general said last week in no uncertain terms that his office will enforce the law by targeting “willful violations” by manufacturers and not products that were produced before July 1 that are still on store shelves.

“What we’re really going to go after is folks who are willfully noncompliant, who are just not putting labels on their products at all or otherwise trying to skirt the labeling law.”

Vermont will allow a 6-month grace period for shelf-stable food produced and distributed before July 1 to give those products time to move through the system. The attorney general’s office said it won’t take enforcement action against those products during that time, unless it’s obvious that a manufacturer is deliberately disobeying the law.

“Those long shelf stable products are not our concern. Our concern is going to be manufacturers who are choosing not to label or are not labeling for whatever reason.”

Under Vermont’s law, manufacturers must label packaged foods that contain GM ingredients, and stores must post a label on or near unpackaged GM foods, such as produce and bulk food. Some foods, including meat, honey, plain milk, and eggs, are exempt from the state’s labeling law. It does not matter if the animals have been fed or injected with food or drugs produced with genetic engineering.

Foods that require USDA approval of their labels, like those containing meat or poultry, such as frozen dinners or canned spaghetti, are also exempt from the labeling law.

Violators face civil fines of up to $1,000 per day, per product, and not based on the number of individual packages of the product. Retailers who violate the law would receive a 30-day warning to correct the problem before facing fines.

The Grocery Manufacturer’s Association, predictably, is unhappy with Vermont’s law. The group wants has pushed for voluntary labeling, and not mandatory labeling. Though if mandatory, the group says GMO labeling laws to be nationwide, saying that individual legislation only creates a patchwork of confusing and expensive state laws.

The association also expressed concern over recent lawsuits filed on behalf of private citizens and organizations against food companies, and says a recent memo from Vermont Attorney General Bill Sorrell failed to specify how he would recognize a “willful” violation without bringing an action.

In a statement e-mailed to Natural Product Insider, Brian Kennedy, a spokesman for the trade association, said:

“Given that Vermont’s Attorney General is no longer responding to public inquires on how to comply with the state’s arbitrary and confusing labeling law, we appreciate any clarifications his office is willing to share. However, the Attorney General’s memo does nothing to clarify how his office will stop private litigants from bringing actions against a company even if his office does not consider the mislabelings to be ‘willful’ violations. Nor does he clarify how he will know a ‘willful’ violation without bringing an action.”

Many food companies have been preparing for Vermont’s labeling law since the Senate voted 49 to 48 last month not to advance a revised version of legislation calling for a voluntary labeling standard.

Maine and Connecticut have passed laws that require such labeling if other nearby states enact a similar one.