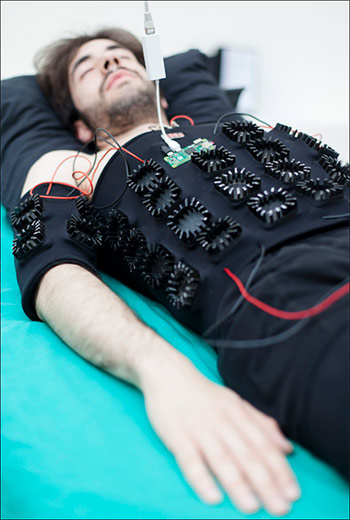 A Dutch startup has been using the body heat of volunteers to mine cryptocurrencies in a project reminiscent of “The Matrix.”

The Institute of Human Obsolescence (IoHO), a business venture based in The Hague, Netherlands, since 2015 has utilized specially-designed bodysuits to turn excess body heat into digital currency.

“A single human body at rest radiates 100 watts of excess heat,” IoHO’s website states. “We created a body-suit that uses thermoelectric generators to harvest the temperature differential between the human body and ambient and converts it into usable electricity. The electricity generated is then fed to a computer that produces cryptocurrency.”

More than 37 volunteers have reportedly produced 127,210 over the course of 212 hours since the project’s inception.

The company says it has focused solely on alternative coins such as Dash and Lisk, as opposed to Bitcoin, given the relatively low energy requirements needed for mining.

“We never mined bitcoins because it would be useless to produce them with human heat,” Beltrán said. “We exclusively mined altcoins and some of them have risen over 46,000% in value. What in the beginning was just small cents now became substantial amounts of money.”

Of the 16,594 coins mined, volunteers kept 80 percent while the remaining 20 were kept by the IoHO.

Oberhaus estimates that had the startup attempted to mine a single Bitcoin, it would have taken more than 44,000 volunteers spending 24 hours per day in the bodysuit for one month.

“To do 1 bitcoin per month with IoHO’s tech—which in terms of efficiency is on par with most affordable wearable thermoelectric generators available today—you’d need around 44,000 people providing their body energy 24/7,” Oberhaus writes.

The IoHO bodysuits are believed to only be capable of harvesting less than 1 percent of the body heat produced by the volunteers.

“Machines are outing us,” the IoHO website states. “As some time ago happened to horses after the invention of the steam engine, humans are becoming obsolete to perform mechanical labor, soon, with the advance of artificial intelligence, it will also affect our possibilities to be useful workers performing intellectual labor.”