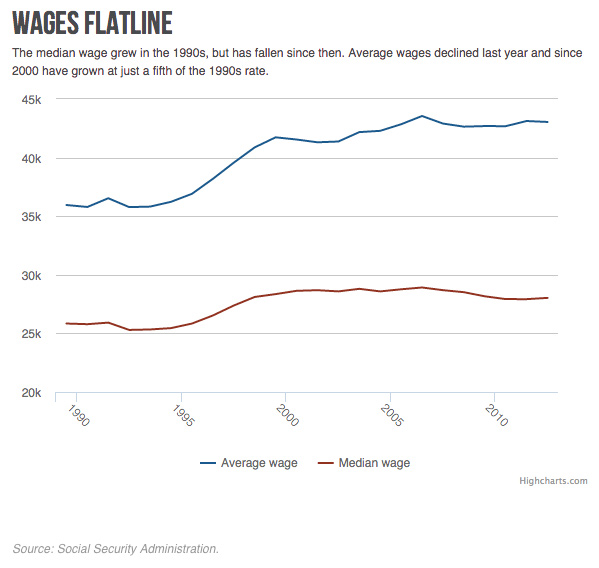 Flat or declining average pay is a major reason so many Americans feel that the Great Recession never ended for them. A severe job shortage compounds that misery not just for workers but also for businesses trying to profit from selling goods and services.

Average pay declined in 59 of the 60 levels of worker pay the government reports each October. The Social Security Administration slices wages into tight categories, starting at $1 to $5,000 and topping out at $50 million plus.

Which group of lucky duckies didn’t see their pay fall? Workers making more than $50 million, who saw their average pay rise by $12.8 million, to $111.7 million.

But even at those pay heights, the news was not all good. The number of such lucrative jobs plummeted, down a third, from 166 in 2012 to 110 last year, part of broader decline in jobs paying $1 million or more since 2000. And among these highest-paid workers, average pay was well below the 2000 average of $150 million.

Overall median pay — half of Americans make more, half make less — rose slightly last year. It was up a scant $109, to $28,031. That was still $320 below the 2000 median. It also was slightly lower than the 1999 median of $28,109, a troubling measure of long-term wage stagnation that is eroding the American work ethic and discouraging individual investments in acquiring and refining job skills.

The median wage grew in the 1990s, but has fallen since then. Average wages declined last year and since 2000 have grown at just a fifth of the 1990s rate.

One encouraging sign in the new data was the increased number of people with work. Last year nearly 155.8 million Americans had at least some paid work, up 2.1 million from 2012.

The number of added workers almost equaled the 2.4 million increase in population, a significant improvement from the trend line since 2000. From 2000 through 2013, the number of people with work increased by 5.7 percent, less than half the 12 percent increase in population. The increased competition for jobs puts downward pressure on wages and discourages many people from even looking for employment.

A good way to grasp the loss of American purchasing power is to compare earnings from jobs to population and the size of the economy. My analysis shows that the slice of the economic pie going to worker pay is thinning while the slice for profits is fattening.

During those years gross domestic product — the value added by workers and capital — grew. GDP per capita increased 11.6 percent over the period when wages per capita declined by 1.8 percent.

Not all workers, of course, have the same results. Some workers move up the income ladder as their careers advance, while others are forced to take pay cuts, accept early retirement or get laid off only to discover that their next job comes with less pay and few or no fringe benefits.

The overall decline in purchasing power per American is a major factor in the recent drop-off in corporate profits, which had been soaring since the recession officially ended on June 30, 2009. At Walmart, McDonald’s and other companies that sell to workers in the bottom half or even the bottom 90 percent, corporate financial reports show eroding conditions, with profits falling and debt rising. This is the inevitable and unavoidable result of pay and jobs not growing in tandem with the economy, especially the increases in productivity that in the postwar era used to be shared by investors and workers.

Better pay and more jobs would help remedy this, but congressional gridlock is holding back economic reforms as a minority of lawmakers blocks government investments that fuel economic growth — especially investments in basic research, education and infrastructure.

The decline of unions is also tamping down worker pay. While the United States’ major economic competitors Europe, Japan and Canada are heavily unionized, only about 1 in 15 American private sector workers is a member of a union.

Employers are in such a powerful position at this point that it may be misleading to speak of a job market in the traditional sense of an open, competitive marketplace for labor. Instead we have created a one-sided market with take-it-or-leave-it pay for the vast majority of workers who lack unique talents.

The wage data I analyzed account for more than two-thirds of total individual income reported on tax returns each year. The Social Security Administration datacount to the penny the $6.7 trillion in wages, salaries, bonuses, overtime, most stock option profits and some other minor components of pay that are taxable, such as premiums on large insurance policies for some workers.

Across the board, the trends both short-term and long are clear: too little job growth, combined with slowly falling wages, except at the very top, where jobs are being cut.

We can do better than this. We can elect leaders who favor broad prosperity through time-tested principles that encourage investment in economically productive activities rather than in financial speculation and unproductive assets such as mansions and yachts, that favor domestic jobs rather than offshoring, that restore bargaining power to workers and that recommend major new public investments that will make the economy more efficient and expand the knowledge base from which wealth creation springs.

America will remain in the economic doldrums until our political leaders recognize these trends and use their power to change them or until we fire them at the ballot box.