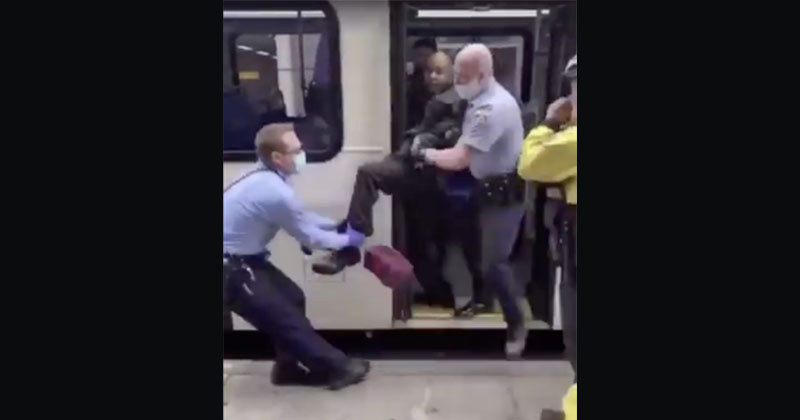 Authorities across the country have begun enforcing social distancing measures in their towns and states, but some enforcement has clearly crossed the constitutional line and violated civil liberties.

From California to New York, police and Democrat leaders have shown staggering overreach in enforcing certain social distancing measures in recent days, from banning the sale of seeds and baby car seats to punishing people simply for being outside even if they’re alone posing no health risk to others.

This video shows a Mississippi police officer telling a pastor his rights have been “suspended” for holding a drive-in church service.

Video from Pastor Hamilton of King James Bible Baptist Church in Greenville, MS. Church tried the “drive-in” method of holding services & were targeted due to the Mayor issuing an order prohibiting such services. Watch as an officer tells the Pastor that his rights are suspended. pic.twitter.com/zLdT6Qd8ew

This video shows a pair of police officers trying to reprimand a person jogging alone along a beach — however, the runner quickly escapes.

What the heck is the harm of going for a run alone on the beach? It's probably a thousand times safer than putting gas in your car or getting groceries. Run Forest run! pic.twitter.com/Po1n8m4XWg

Here, Philadelphia police violently assaulted a man for the “crime” of not wearing a face mask in public.

This is a video out of Philadelphia.

These police are throwing this man off of a SEPTA bus because he refused to wear a mask.

That is the “crime” that he committed.

The United States of America: 2020. pic.twitter.com/KXr5SGBx6K

Democrat Governor of Michigan Gretchen Witmer banned the sale of items she deemed “non-essential,” like seeds and baby car seats.

.@GovWhitmer has banned us from growing our own food. This is fucking insane. pic.twitter.com/qOGMsBBVXJ

Earlier this week, Arkansas police removed the basketball hoop from a court after a 12-year-girl was found playing basketball alone.

A 12-year-old girl was playing basketball alone on a court near her family’s home when city officials arrived and removed the hoop as part of “social distancing” enforcement. https://t.co/zOHcCFPRO9

Colorado police also arrested a father in front of his 6-year-old daughter while playing tee-ball in a park for violating social distancing orders.

As a softball Dad, this one is particularly NUTS. Arresting a father—in front of his 6-yr-old daughter—for playing T-ball has ZERO basis in public health. CO leaders should be ashamed. Reminder to over-eager politicians: we do NOT live in a police state. https://t.co/QUvBH1lxuZ

Democrat Kentucky Governor Andy Beshear even threatened to quarantine Easter Sunday churchgoers for 14 days, whether they test positive for COVID-19 or not.

Taking license plates at church? Quarantining someone for being Christian on Easter Sunday? Someone needs to take a step back here.

Kentucky Governor Announces Plan to Record License Plates of Easter Church Goers and Force Them to Quarantine for 14 Days https://t.co/z7U42liQRh

And earlier this month, California police arrested a man for the crime of paddle boarding alone in the ocean.

And this is just in America.

Apparently, a virus pandemic is all it takes to transform the Land of the Free into a mirror of Communist China.