New lab report testing carried out by Moms Across America has found the world’s number one herbicide, glyphosate, to be in feeding tube liquid which is given to babies and children who are in need of nutrition in intensive care. Specifically, the herbicide was found in PediaSure Enteral Nutritional Drink.

The testing found that 6 of the 20 samples tested contained ‘high’ levels of glyphosate – over 75 ug/l, which was the minimum detection level of the ELISA assay used. These levels are higher than what has been shown to destroy gut bacteria in chickens (.1ppb).

“It is appalling that our health care providers have been led to believe this feeding liquid is safe. Our children and loved ones believe that our health institutions are supporting their immune system and recovery, instead they are being fed a liquid which contains a herbicide that could be seriously damaging their health.”

The PediaSure Enteral Nutritional Drink tested contained GM maize (GM corn syrup) and GM soya, both of which are sprayed with glyphosate-based herbicides (these include Monsanto’s ‘RoundUp’ herbicide), during the growing season and at harvest as a drying agent.

Abbott Nutrition, the manufacturer of the PediaSure family of products, describes them as “a source of complete, balanced nutrition designed especially for children 1 to 13 years of age.”

“As a mother I am very disturbed by these results. Working as a paediatric Physical Therapist I met children with feeding issues who depend on tube feedings for their entire lives. Children who experience trauma and are recovering from car accidents, shootings, cancers, surgeries and other illnesses may require these tube feedings for days, weeks, or years.

I have long questioned the nutritionally poor and inflammatory ingredients in these feedings but am devastated to find out that they are contaminated with poison. Our most vulnerable children, and our children healing from overwhelming trauma, deserve better.”

This new testing is the latest to raise awareness regarding the ubiquitous and harmful nature of glyphosate-based pesticides. Regulators as well as Monsanto claim that glyphosate is excreted from the body, but numerous studies have shown that not only is it causing numerous health problems, it is also showing up in urine samples, blood samples, and even breast milk.

The lab results also follow the first ever pilot biosurvey on glyphosate in the breast milk of American women, commissioned by Moms Across America and Sustainable Pulse in 2014, which found ‘high’ levels in 3 out of the 10 samples tested. 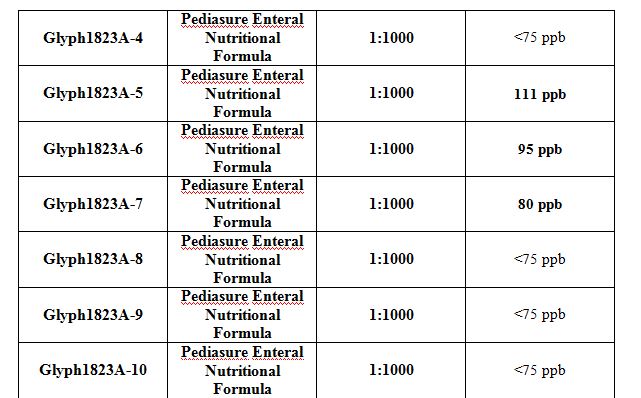 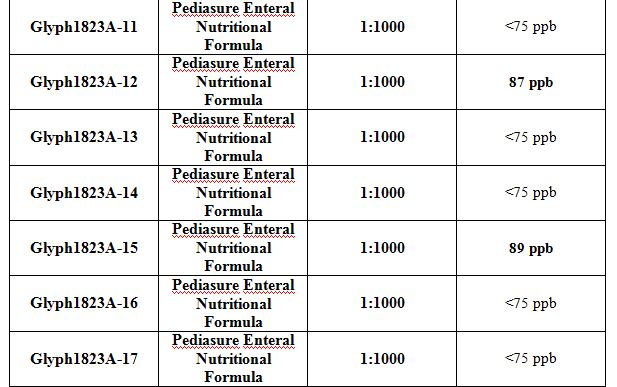 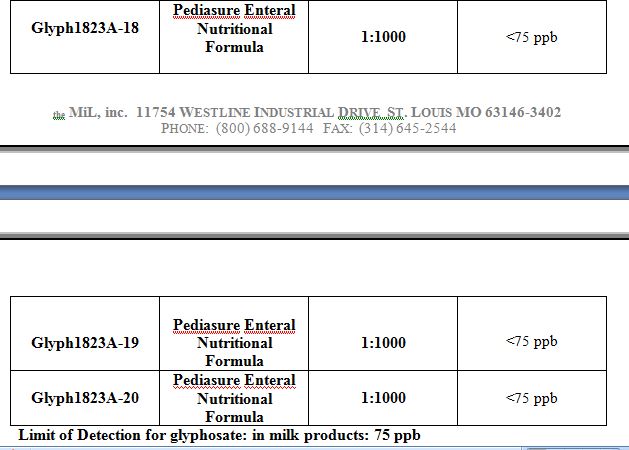 “The more data produced regarding the levels of glyphosate in our food, water and medicines the better. Even though this testing is not validated it does give a strong clue as to how ubiquitous glyphosate is in the U.S. food supply system. The question the EPA, USDA  and all regulatory bodies worldwide should be asking themselves is are they willing to risk public health by relying on short-term industry sponsored safety studies on glyphosate and all other pesticides.

It is time for the regulators to support long-term independent science to determine just how damaging glyphosate pesticides are for this and future generations. While these studies are being completed all glyphosate-based herbicides should be removed from the shelves.”

Approximately 1 billion pounds of pesticides are sprayed on crops in the United States alone every single year. Thanks to pesticide/herbicide-resistant GMO crops, that number is growing every year. Much of this pesticide spraying contains a toxic ingredient known as glyphosate – the primary poisonous active ingredient in Monsanto’s best-selling herbicide RoundUp.