The TSA has failed to respond to the now confirmed fact that the federal agency has introduced a bizarre new policy in which travelers are ordered to “freeze” on command by TSA screeners while passing through security, a policy described as “obedience training” by critics. 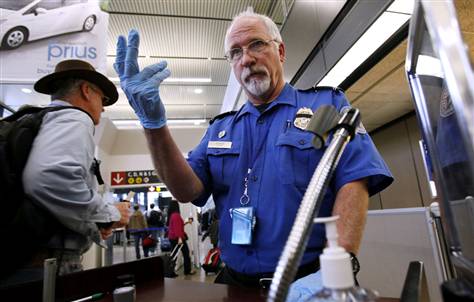 In our article on Friday, we featured the story of a man who was passing through airport security when he heard a commotion.

“We heard a “freeze, freeze” or something like this coming from the output side of (false) security (where my wife was), followed by further barking of commands. From where I was, I couldn’t see much.”

“It turns out they were doing a new drill. They want all passengers to freeze on command. My wife told me later that she didn’t follow this order fast enough, so the subsequent barks I heard were directed at her.”

We have since received numerous emails and other correspondence from other people traveling through U.S. airports who have experienced the same situation where they were commanded to “freeze” by TSA workers.

“This happened to me last year in Atlanta,” one traveler told us via email.

The story was also covered by Gather.com’s Jim Kane, who asked, “This anecdote has not been confirmed by the safety agency, so it should remain in the rumor zone at this point. But, considering all the crazy TSA rules, would anyone be surprised if it were true?”

However, the policy is no mere anecdote, it’s a confirmed fact. The TSA is ordering travelers to “freeze” on command as part of a security drill named ‘Code Bravo’. This is documented in a New York Times article written by Joe Sharkey in which Sharkey explains how he was caught up in the fiasco on two separate occasions in both Atlanta and Los Angeles.

When Sharkey failed to obey a TSA screener who shouted “freeze,” he was assailed by another traveler who “growled” at him, “You’re supposed to freeze!” as other passengers complied with the bizarre demand.

Sharkey later discovered that the TSA had no power to force travelers to comply with the command.

“Passengers are not required to ‘freeze’ in place like statues,” TSA spokeswoman Kristin Lee admitted.

However, in every case where the “freeze” command has been witnessed, the behavior of TSA agents has made it clear to travelers that if they don’t do precisely that, they will face the consequences.

“It was clear to me that travelers believed they were required to stop and stand motionless — even those who had cleared security and were merely within shouting distance of the checkpoint. Officers seemed to reinforce that impression, too,” writes Sharkey.

“As we were going through the security checkpoint, one of the supervisors suddenly yelled ‘freeze!’ Everyone was forced to just stand there for about a minute. We were not allowed to move, fidget, look around, speak, nothing,” commented another woman who had traveled through Atlanta Airport.

Treating passengers like naughty children or prisoners on a whim as part of a “drill’ that has no purpose whatsoever is par for the course when it comes to the TSA’s twilight zone approach to airport security.

As WeWontFly.com’s James Babb describes, this is nothing more than “obedience training.” The American people and travelers in general are being ‘broken in’ to accept their subservience in what represents the human equivalent of horse training.

Just last week the TSA admitted that it had introduced the equally ludicrous new policy of testing travelers’ drinks purchased in the airport after they had already passed through security.

Infowars contacted the TSA on Friday morning regarding the ‘freeze on command’ policy but has not received a response. In addition, no explanation or denial of the policy appears on the TSA Blog website. The federal agency presumably doesn’t want to draw media attention to the insane policy in order to protect its already savaged public image.