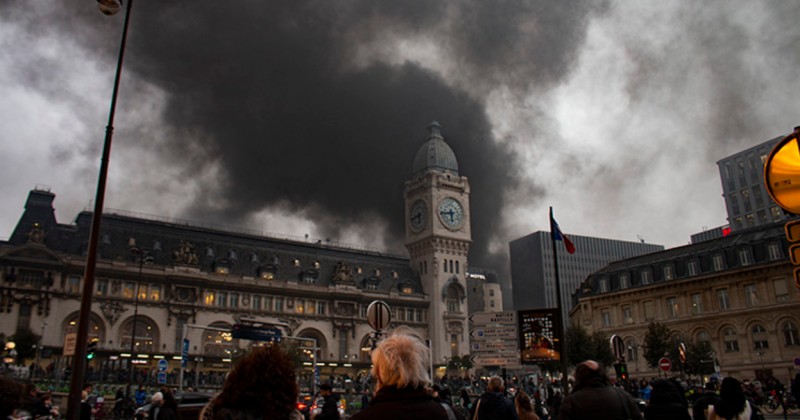 The station was partially evacuated late Friday as police urged the public to avoid the area.

Lots of damage caused by protesters setting fire to parts of Gare de Lyon. At least 30 motorcycles, scooters & rental cars have been torched. Part of a building was also set alight. Reports it is linked to this evening’s concert of Congolese star Fally Ipupa. #garedelyon pic.twitter.com/66TqMqqrcn

Another video shows plumes of black smoke rising from a large fire near the station.

You’ll be forgiven for thinking that this is a video from some war in the Middle East but it actually is migrant riots today in Paris near #GareDeLyon.Congolese migrants are fighting the police because some singer(FallyIpupa)that they don’t like will play pic.twitter.com/3LMNsdoexD

RT reports that the mob “tried to prevent firefighters from putting out the blaze” and video footage appears to confirm that.

The crowd were rioting in response to Congolese singer Fally Ipupa performing at a nearby venue.

“Congolese expats regularly speak out against artists from home who perform in France or Belgium, accusing them of being close to former DR Congo president Joseph Kabila and his successor Felix Tshisekedi,” reports the Telegraph.

Before the concert, police vowed to mobilize “significant resources” in order to “prevent any disturbance to public order.” They appear to have failed miserably.

As you can tell from the videos, diversity in France continues to be a strength.