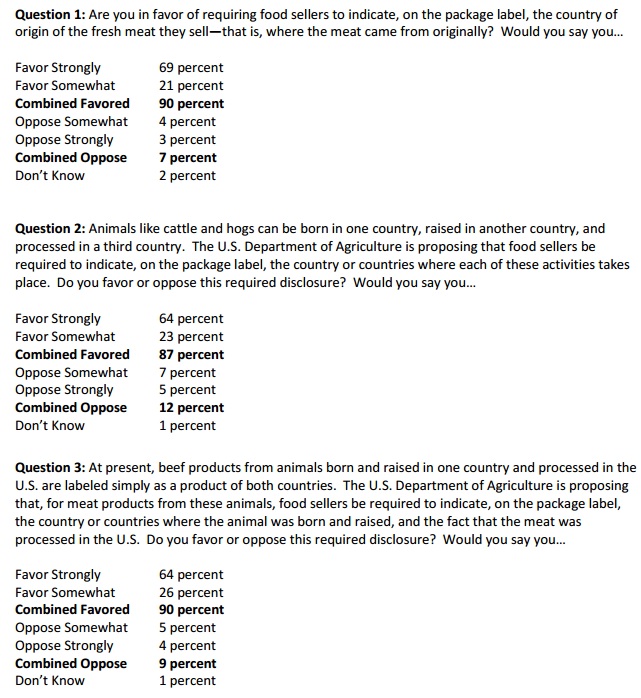 The spending bill passed by Congress on Friday repealed the country-of-origin labeling (COOL) regulation that let consumers know where their meat came from.

The decision follows a ruling from the World Trade Organization (WTO) that found the labels discriminate against meat raised and slaughtered outside the United States. The WTO permitted Mexico and Canada to impose more than $1 billion in tariffs on U.S. goods in retaliation if the labels were not pulled from packages of beef and pork. The nations are the U.S.’s top agriculture partners. [1]

Meat packers and members of Congress had fought for years to repeal the law, even though country-of-origin labels also appear on many foods, including peanuts, fish, and apples.

“Our attitude was we were going to use every available mechanism to get a bad idea, and a bad law, repealed,” said Mark Dopp, general counsel for the North American Meat Institute, a group that represents livestock producers and meat packers such as Tyson Foods Inc. “While we couldn’t initiate WTO litigation, we were glad that the Mexican and Canadian governments did.”

The labeling gained support in Congress in 2000 when mad-cow disease (known as variant Creutzfeldt-Jakob disease in humans) weighed heavily on the minds of lawmakers and consumers alike. Consumer groups argued at the time that the labels would help shoppers avoid products from countries hit particularly hard by the disease. Meat packers, however, said the regulations imposed unnecessary costs and burdens by requiring them to track and sort animals throughout their lifetimes. [2]

Brazil suffered an outbreak of mad-cow disease as recently as 2014, and hoof-and-mouth disease has plagued the country.

The U.S. Department of Agriculture (USDA) will continue to inspect all meat before it reaches grocery store shelves, but food labeling advocates compare eliminating nation-of-origin labeling to removing ingredient labels that Americans depend on to know what is in their food.

“This is a rotten way to do legislation, by attaching these barnacles on the omnibus bills in the dark of the night,” said Roger Johnson, president of the National Farmers Union, a Washington, D.C.-based organization.

Ninety percent of Americans support country-of-information labeling on meat products, according to a 2013 survey.