Expert school safety consultant continues being stonewalled at every turn

For over a year, former educator, US Customs agent and school safety expert Wolfgang Halbig has been on a painstaking mission to uncover the truth behind what really happened in Newtown, Conn., on December 14, 2012 – the day the world was told 20 schoolchildren and 6 staff members were shot and killed by a 20-year-old weighing just above 110 pounds.

Halbig has narrowed down a list of 16 questions which he has yet been unable to get answered.

Last week, the former school principal and a group of his supporters headed to the crime scene in an effort to bring those questions to the attention of the Newtown Board of Education. Not surprisingly, he was met by a strong police presence and a deluge of negative press that, instead of investigating his research, was more concerned with painting him as a conspiracy loon.

“Do you not teach character education?” a frustrated Halbig asked a room full of school board members. “You used the word ‘honesty’ in your presentation. Where’s the honesty in this room?”

For Halbig, something wasn’t right after homicide investigators were twice sent to his home in Florida to tell him the Conn. State Police were ready to file charges if he didn’t stop looking into the event’s various inconsistencies.

But their visit only served to embolden the retired Florida state trooper, who due to encountering several stonewall efforts remains convinced the shooting was a completely fabricated event geared to mobilize the public’s support behind stricter gun regulations.

And just yesterday, the shooting was cited as the main reason New Jersey is moving to restrict the number of rounds a firearm magazine can hold. “Today we’re taking another step to fulfill a promise that many of us here made to the parents of the children of Sandy Hook Elementary School in Connecticut who suffered losses beyond comprehension,” New Jersey State Senate Majority Leader Loretta Weinberg said following the Senate’s passage of the bill. For the three minutes he was allotted, Halbig attempted to convince the board he was not there to cause trouble, but to get answers he and the nation, nay the world, desperately need. Board members received him with blank stares. Some of them looked down while he spoke, others seemed bemused and still others sat with guilty, grim expressions written across their faces.

Off the bat, Halbig’s questions evoke a disconcerting feeling, but he insists they should not be offensive “to any parent that lost a child that day,” or to the Conn. State Police.

For instance (and Wolfgang posed this to board members) why were no trauma helicopters ever summoned? “Those are the quickest and the best medical services that any child or any school staff member can receive, and no trauma helicopters were ever requested?” Halbig underscored in a previous interview with American Free Press.

In an interview today with Alex Jones, Halbig argued that the United Way of Western Connecticut’s solicitation for Sandy Hook relief funds prior to the shooting was one of the main smoking guns in the case. See the image of a Google search below: 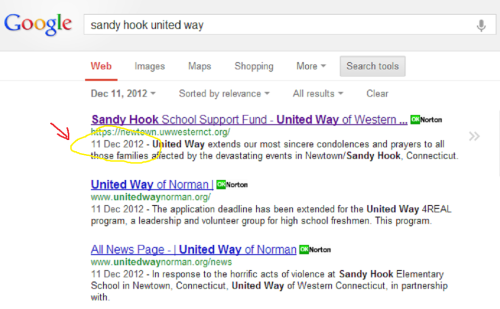 Equally suspicious is that several police officers blocked access to the Newtown branch of the United Way when Halbig attempted a visit.

Additionally, Halbig questions, why were paramedics not let into the school following the shooting? “Board members these are your children, and you wouldn’t let paramedics and EMT into the building?” Halbig asked.

And why were Port-A-Potties immediately on scene, who predicted their necessity and who requested them? “High priority for toilets but not for Life Star Trauma helicopters or paramedics,” Halbig’s blog Sandy Hook Justice.com highlights.

Indeed, enough time has passed for answers to be forthcoming and FOIA requests to be responded to, but the town’s eerie silence to Halbig’s questions and the plethora of condescending, stomach-churning hit pieces leads one to assume the state of Connecticut is engaged in a massive coverup.

Below is the list of “SIXTEEN QUESTIONS THAT DEMAND THE TRUTH” from Halbig’s blog. He is asking everyone remained focused in trying to get answers for these questions, as he feels they will reveal what really happened that fateful December day.

2. Why and for what reason would the FBI classify the SHES shooting when they did not classify the Columbine shooting which also was an Active Shooter Mass Casualty Incidents (AS/MCI)?

3. Who on was the Incident Commander as required by the Federal Emergency Management Agency in directing the AS/MCI at SHES?

• Who at the Incident Command Center made the ordering of Port-A-Potties a high priority since they were delivered within three hours of the school shooting?

• Who ordered those Port-A-Potties from Southbury, Connecticut?

• When I called the Port-A-Pottie company, after searching for over a week as to who they were and when they were ordered, I was told this information was classified and they are not allowed to share that information with me.

• The next morning I received a phone call from the Southbury Police Department at my home telling me not to call that company again, since I was harassing them.

• High priority for toilets but not for Life Star Trauma helicopters or paramedics.

4. Who and why did they not request Life Star helicopters, knowing that children and school staff were seriously injured and clinging to life?

5. Who and why did they not allow the paramedics and the EMTs inside SHES?

6. Who declared all 18 children and six school staff members legally dead within the first eight minutes?

8. Why does an off-duty lieutenant from the Newtown Police Department (NPD) refuse to leave his off-duty work assignment at a construction site when hearing that shots have been fired at SHES?

9. Who at NPS notified all of the parents in writing, as required by Conn. law, who had children attending SHES, as well as every school staff member, for every school year, of all the potential life threatening chemical hazards? The school had high levels of lead paint throughout the entire school, asbestos in the ceiling and floor tiles, asbestos in the insulation, and most of the school had very high levels of PCBs.

10. Who provided the urgent medical care to the two children who were not transported to the Danbury Trauma Center until an hour after the school was deemed safe for that 15-mile drive?

11. Who treated those two children who had been shot multiple times, like three to 11 times, since they did not allow the paramedics and EMTs inside SHES?

12. Why did the parents of the two children who died at the Danbury hospital not allow their children to donate their organs to other children waiting for the gift of life?

14. Who was the police officer calling into the NPD dispatcher stating, in his words, that he had multiple weapons, a rifle and a shotgun, and who has the rifle and the shotgun, as the chain of evidence should show, that was found in classroom eight (8)?

15. Why would a police officer by the name of Lt. Vangehle, at 9:45:21 a.m. on 12/14/2012, from the NPD, after finding a female kindergartener in the hallway, make her go into room eight (8) and leave her there? Room eight was supposedly the gruesome crime scene with dead children and school staff.

16. Why would two Conn. State Troopers enter room ten (10) at 9:55:31 a.m. on 12/14/2012, which was supposedly the gruesome crime scene with dead children and school staff, and tell a male kindergartener who they found in the bathroom, who’s name is redacted, and tell them (so it must be more than one), to stay and they will both be back when it is safe?

Alex Jones goes on the record with his thoughts and analysis on the Sandy Hook shooting, highlighting some of the major red flags and shedding light on CNN’s proven track record of faking news reports while working with Military Intelligence.