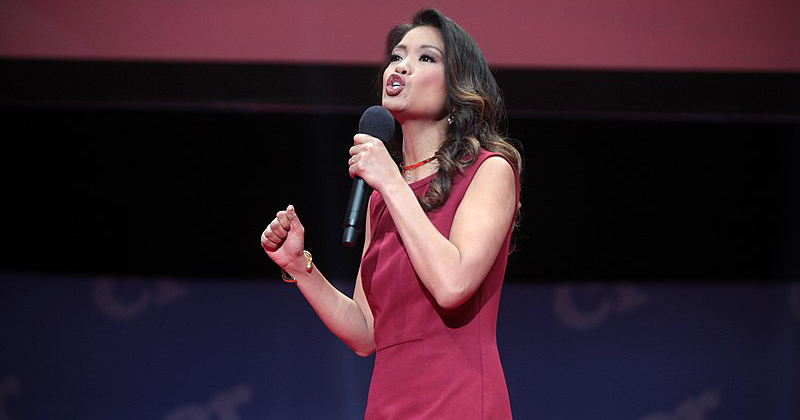 Conservatism Inc’s leading grift-right “influencers” which regularly rail against “safe spaces” and “cancel culture” are working with the liberal media to silence Catholic conservative commentator Nick Fuentes for disrupting their safe spaces by having his supporters ask them hard questions.

The first was a Media Matters-style hit piece from The Hill’s Jonathan Easley which read like it was written by TPUSA working in concert with Right Wing Watch.

From The Hill, “Conservatives seek to stifle new ‘alt-right’ movement steeped in anti-Semitism“:

A fringe group of far-right activists have been disrupting conservative and pro-Trump events in recent weeks, drawing rebukes from mainstream Republicans who are eager to separate the party from white nationalists and alt-right racists.

A small but vocal group of young men led by 21-year-old broadcaster Nicholas Fuentes received national attention this week after heckling Donald Trump Jr. at an event in California, where he was promoting his new book “Triggered.”

Fuentes and others on the far right have been publishing calendars of events held by Turning Point USA founder Charlie Kirk, conservative media stars Ben Shapiro and David Rubin and others, including Trump Jr. and Rep. Dan Crenshaw (R-Texas), in an effort to have their followers infiltrate and disrupt the events.

Lets put those descriptions together.

Their grift-right opponents are “mainstream Republicans” and “conservative media stars.”

The Hill finished by retconning Crenshaw’s threatening rhetoric towards the conservatives who questioned him during a public “Prove Me Wrong” event last week:

After the “Groypers” confronted Crenshaw at a public event in Arizona, the congressman said that he felt sorry for the young protesters.

Crenshaw predicted they would grow up to regret having been captured forever on video and revealed as racists.

“This is the alt right 2.0 because the alt right was discredited,” Crenshaw said. “So what they do is try to cloak themselves in some logical nationalism or MAGA-hat wearing America First rhetoric, which a lot of conservatives agree with, and then they use that to cloak their anti-Semitic leanings, and their racist leanings, and it’s pretty gross. You’re going to regret this.”

Every time the media mentions me they throw in completely irrelevant things I’ve said and ignore the context of those quotes to paint me as controversial, do they ever do this with Shapiro? Remember when he was in favor of ethnically cleansing Israel? Why is that never mentioned?

Shapiro calls me anti-Semitic and his employee said that “Jew hatred is inherent in European DNA.”

I’d take these accusations with a grain of salt. pic.twitter.com/FLlx7XIWBA

The second article, which Drudge shared under the title, “Fuentes Rising…” was a similar though slightly less biased hit piece from Nick Anderson in The Washington Post.

From The Washington Post, “Far-right agitators roil the conservative movement on college campuses in battle to define Trumpism“:

Conservative commentator Ben Shapiro revised his usual bash-the-leftists script in a speech this month to a packed auditorium at Stanford University.

He still mocked the “radical left,” but on that evening, Shapiro unloaded on far-right figures who traffic in white supremacy and anti-Semitism. “Pure, unbridled, vile garbage,” he called it.

A few days later, the far right derailed a conservative event on another campus. Donald Trump Jr., son of the president, had come to the University of California at Los Angeles to promote his book “Triggered: How the Left Thrives on Hate and Wants to Silence Us.” Chanting “Q-and-A!” far-right protesters jeered organizers who apparently had decided to block questions from the audience. The event was abruptly cut short, a humbling scene for Trump Jr.

Michelle Malkin was fired by the Young America’s Foundation on Sunday over her bold speech last week at UCLA defending the free speech rights of Fuentes and the young conservatives asking hard questions of Conservatism Inc.

There is no room in mainstream conservatism or at YAF for holocaust deniers, white nationalists, street brawlers, or racists.

Our full statement below: pic.twitter.com/b5EB7P53v3

Her firing was cheered by The Bulwark’s Jim Swift (who works with Jonah Goldberg):

Didn’t you literally write a book on how the “Left Wing Outrage Industry Shuts Down Debate?” You post a 10 second clip from my show probably sent to you by some TPUSA shill to elicit outrage and get me deplatformed or discredited. You’re a sick liar and a fraud. pic.twitter.com/MyWIX6iofF

To put it mildly: Fighting to keep a vile and racist Holocaust denier within the broader “conservative” movement fold is not a noble hill to die on.

Hi @michellemalkin. Fuentes called me a "race traitor" and "f*ggot" because I "work for Jews." He also said that black people who complained about segregation needed to "grow up." How do you feel about these statements? And in what way are they "America First"? https://t.co/fz8qcXrRCl

Are you telling me the guy who publicly supports Jim Crow, marched with Richard Spencer, says the Holocaust didn't happen, called for executions at CNN, and refers to people as "shabbos goy race traitors" might have a problem with certain racial minorities? https://t.co/BrOxub1r0y

Nope. Basically all decent people who know anything about your comments are cheering.

Michelle Malkin identified a Holocaust denier & open anti-Semite, whose history she was well aware of, & repeatedly proclaimed to crowds that she would not disavow him. She then falsely ID'd him as a leader of a mainstream movement. Her conduct is insanely harmful & inexcusable.

Problems like that fucking green screen nerd Fuentes usually solve themselves. If Malkin wants to choose to be flushed with that turd, so be it.

Both Fuentes and Malkin forcefully defended themselves against Conservatism Inc’s organized smear campaign:

All the Cons lustily retweeting Daily Beast/HuffPo/ #OpenBordersInc oppo research & recycled slime to bring me down for defending free speech & #AmericaFirst : Screw you.

All those who see through the bullshit: Thank you.

Here's the YouTube video of my #openbordersinc #americafirst speech that @YAF declares "racist" and beyond the mainstream ==>https://t.co/g7oryXpSeM

Controlled opposition feeding bread & circuses to the masses to distract.

I notice you didn't tag me, though you still follow me. Here's full text & video of my remarks, so that good-faith conservatives can read/watch the truth, instead of SPLC-ized version you are spreading to delegitimize & un-mainstream me. You will fail.https://t.co/qfdTPzHsNK https://t.co/nOgl9hEKbb

All of the vicious smears against me and others you've seen in the last four weeks only signals weakness from the establishment. This hysterical "scramble all brand ambassadors" DEFCON 1 crisis response is an act of desperation. They are panicking because we are winning.

How is this any different than the SPLC? Every conservative grifter, censor, and gatekeeper is exposing themselves this month, it’s absolutely pathetic. https://t.co/N0QN3h5lYL

Nobody in YAF or TPUSA has ever attacked anyone on the Left as viciously and unscrupuously as they have me. They will have polite, amicable conversations with people who support ABORTION & political violence against conservatives, but they crucify me, a Catholic Trump supporter.

They will debate any Left Wing college student or pundit, but they pretend like they don't even know who I am and refuse to say my name or engage, until Kirk literally plays clips of my show at his prove me wrong table and Shapiro delivers a 45 minute speech condemning me.