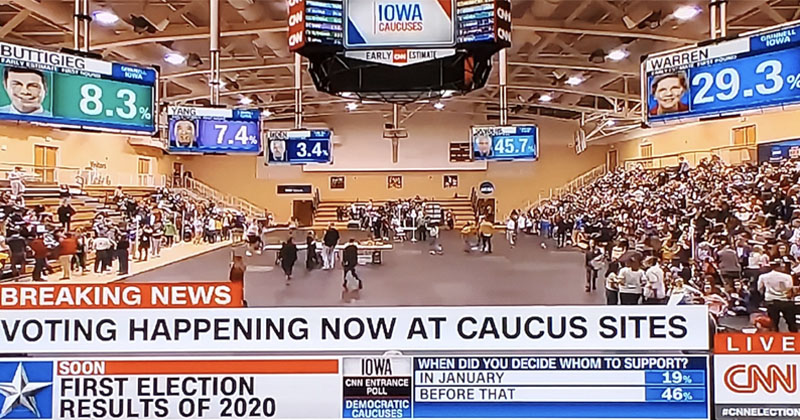 Prominent conservative lawmakers and media personalities excoriated the Democrats’ botched Iowa caucus on Tuesday, after the pivotal event descended into chaos with zero results and no clear winner.

“The same Democrats who want to take over everyone’s healthcare and micromanage the entire economy couldn’t even organize their own traditional Iowa caucuses?” the Kentucky senator tweeted.

The same Democrats who want to take over everyone’s healthcare and micromanage the entire economy couldn’t even organize their own traditional Iowa caucuses?

Several other conservatives like Sen. Ted Cruz (R-Texas) and Fox News host Laura Ingraham echoed his sentiment, questioning whether the Democrat Party is even capable of leading the country, let alone implementing their far-left socialist agenda.

They can’t run a caucus but they want to take over healthcare.

Dems right now can’t even stand in a gymnasium and count how many people move under each sign. These are the people who want to be put in charge of our healthcare & everything else in our lives? No thank you. https://t.co/dGCvckV2FC

If the Democrats can’t even run a primary election, how are they going to run a country?#IowaCaucas

For Democrats, the Iowa caucuses were a disaster.

If Democrats can’t run their own caucus, how can they run our country? pic.twitter.com/LApyxaSzSc

Dems
telling you
they can Dems
manage your managing
healthcare. Iowa caucus pic.twitter.com/7m0SaQkVAy

The Democrats want to:

But they can’t count their own Iowa votes.

The Democrats can’t run a caucus in Iowa but want to run the economy, healthcare and the environment. pic.twitter.com/l88jJiEzX7

This dingleberries cannot get vote totals from Iowa but don’t worry they are going to take 300 million guns, give everyone free healthcare and college and ponies and rainbows. #CIAPete #TomPerezResign #IowaCaucas #DNCisCorrupt.

We knew the Venezuela Wing was taking over the Democratic Party.

We didn’t know they were going to run their elections like Venezuela. #iowacaucusfail

Even Democrat candidates like Bernie Sanders and Joe Biden harshly criticized their own party for the monumental screw-up in Iowa, with Biden even considering filing a court injunction to halt the results of the caucus.

“Obviously, I suspect I speak for all of the candidates, I am extremely disappointed by the inability of the Iowa Democratic Party to come up with the results in a timely manner. I don’t know why in 2020 it should take so much time,” Sanders said.

As of this writing, DNC Chair Tom Perez has not responded to the disaster, with many on the left calling for him to resign.

In fact, Perez has been so noticeably absent from the scene that CNN’s Chris Cuomo begged live on air for him to call in to explain the situation.

“We’ll be working the phones to figure out: where’s Tom Perez? Where’s the head of the DNC? Give us a call Tom! Tell us that this is going to be okay,” Cuomo said.

CNN’s Chris Cuomo: “where’s Tom Perez? where’s the head of the DNC? Give us a call Tom”https://t.co/lAgOJEpnPV pic.twitter.com/PI08Jv9InK

The DNC was clearly buckling at the thought of Bernie Sanders making Joe Biden look like a clown in the oracle of Presidential elections, the Iowa Caucus.