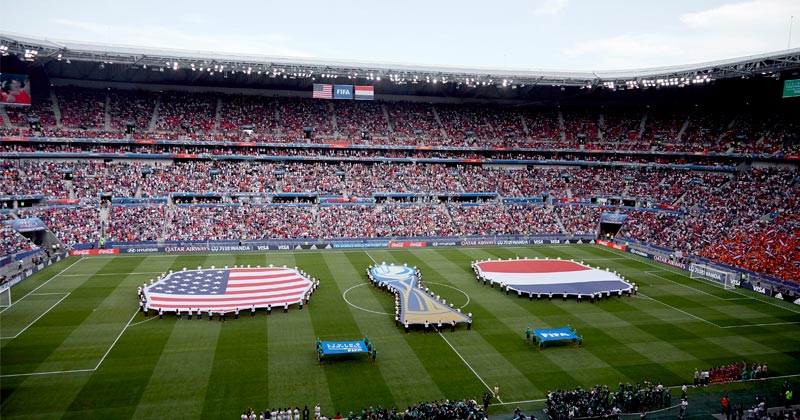 Even for those of us who don’t watch soccer — either men’s or women’s — it’s impossible to avoid the media frenzy over the fact that the women’s US Soccer team’s World Cup victory.

When it comes to professional sports, however, how well a team plays is not what determines the pay of players. What matters is how much revenue the team earns from ticket sales, television deals, product licensing, and endorsement deals.

Revenues follow from the entertainment value of the play. When it comes to compensation, what matters is the ability of the players to entertain. Pro athletes, after all, are fundamentally just performers, no different from the buskers who do handstands on the street corner.

Some people may mistakenly believe that chasing a ball around constitutes some sort of highly-valuable enterprise in itself — but unless consumers are willing to pay to watch it, it has no large-scale economic value.

Thus, the question of whether or not the female athletes are “underpaid” comes down to how much revenue their performances generate.

So, do the women generate more revenue? Unless we’re talking about just the last one or two years, the answer appears to be a clear “no.” But even in recent years, as World Cup victories have piled up for the women, it looks like revenue have only just begun to equal that of the men’s team.

But what about the US women’s team specifically?

According to the Wall Street Journal:

From 2016 to 2018, women’s games generated about $50.8 million in revenue compared with $49.9 million for the men, according to U.S. soccer’s audited financial statements. In 2016, the year after the World Cup, the women generated $1.9 million more than the men. Game revenues are made up mostly of ticket sales. In the last two years, at least, the men’s tally includes appearance fees that opposing teams pay the U.S. for games.

So, very recently, women have begun to outpace the men in ticket sales. But, as the WSJ admits: “ticket sales are only one revenue stream that the national teams help generate.”

And what about revenues from broadcasts? It seems that “TV ratings for U.S. men’s games tend to be higher than those for U.S. women’s games, according to data collected by U.S. Soccer.”

Moreover, Politifact was unable to confirm that total revenue is, in fact, higher for the women in recent years:

During the three years following the 2015 Women’s World Cup, the women’s team brought in slightly more revenue from games than the men’s team did. While marketing and sponsorships are sold as a bundle, there are anecdotal signs that the women’s brand is surging in popularity.

However, it’s harder to say whether the women are ultimately paid less than the men, due to the lack of transparency and the complicated variables that feed into the compensation. Several experts said the reality may be murkier than a shouted catchphrase [i.e., “equal pay!”] can capture.

For the sake of argument, let’s say the women do bring in more revenue. The fact this is such a recent development would help explain why the pay structure has yet to catch up with revenues. Moreover, if US Soccer is going to risk paying out-sized salaries and benefits, it’s going to have to first be comfortable that the women’s teams are a reliable and sustainable revenue source.

Ultimately, however, whether or not the women get “equal pay” depends not on the team owners, but on the consumers. If the women’s team wants just as much pay, it will need to generate just as much revenue. That is, these things will need to happen:

If the fans want the women to be paid more than the men, the consumers will have to spend more.

Even some of the players recognize this. Earlier this week, US women’s team member Megan Rapinoe outlined how consumers can support a pay hike for the women’s team : “Come to games … buy players’ jerseys … become season ticket holders.”

Rapinoe is right. When the consumers pay more to see the women. The women will be paid more to play.