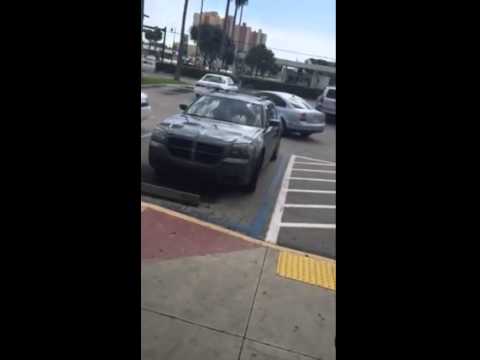 A disabled combat veteran was assaulted and harassed this week by a police officer in Florida who accused the former soldier of not appearing handicapped.

The veteran, identified as Isiah James, was approached by Riviera Beach Police Officer G. Wilson after legally parking in a handicap spot and accused of taking the space from potential wheelchair-bound shoppers.

“You don’t get to decide! The fucking United States government… when I got blown up for my fucking country 8 times with a damn IED, was in a coma for two fucking months… I get to decide whose disabled!” James said after being told he shouldn’t have been issued a handicap parking permit.

Officer Wilson responded to the passionate defense by assaulting James, striking the vet’s injured right hand and cracking his cell phone screen in the process.

Despite a check of James’ record coming up completely clear, officer Wilson continued to harass the veteran for being legally handicapped.

“Just so you know, there’s three screws in this leg right here, traumatic brain injury, all that shit from getting blown up and shot at,” James says. “Two times in Iraq and one time in Afghanistan. Just because I don’t look like a disabled person doesn’t mean I’m not disabled. You don’t get to decide that. Uncle Sam says I’m 90 percent disabled for the rest of my life.”

Incredibly, Officer Wilson continued to harass and even mock James for mentioning his military service while accusing him of “being in the wrong.”

The situation was eventually defused after a second officer, also a military veteran, arrived on scene to speak with James.

The Riviera Police Department responded to the controversy on their Facebook page shortly after the encounter went viral, pledging to conduct a “thorough and transparent” investigation. 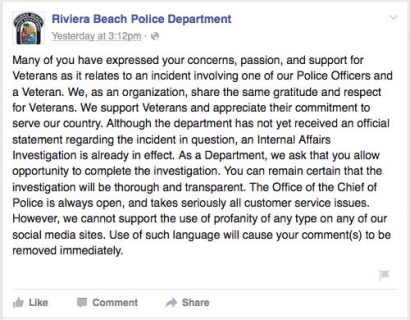