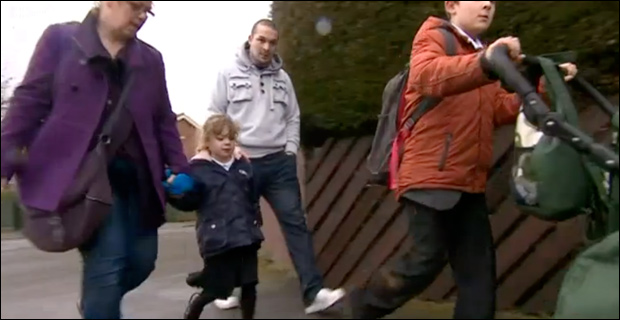 A 4-year-old rebel thought she’d gotten away with the perfect crime when she defiantly pedaled her bicycle on the sacred pavement of a UK footpath.

But to the criminal’s chagrin, a duteous officer stringently enforced an ordinance protecting the walkway from delinquent cyclists, and went above and beyond the call of duty by threatening the miscreant’s two-wheeled property.

The parents of little Sophie Lindley were puzzled by a police encounter last week in which a Lincolnshire officer stated he had the authority to confiscate their daughter’s bike.

Sophie regularly rides with her parents from their home to school.

Last Monday, however, an unidentified cop gave them grief on the nearly two-mile stretch.

“A police car pulled over and told me she had to get off her bike as it is against the law to ride on the footpath,” Sophie’s father Dale described to the Grantham Journal.

“He said ‘The law is the law’ and she was not allowed to ride on the path,” he told the BBC.

“He then drove off but said he’d be checking his mirrors, and if he saw her riding the bike again he would confiscate it.”

Dale picked up his daughter and carried her the rest of the journey as she sobbed, reports The Journal.

Reaction to the incident has been largely negative, with many declaring that the girl’s young age exempted her from the ordinance.

When Sophie’s mom, Emma, phoned police, even they seemed confused by the law.

“One said the law applied to everyone – no-one can ride a bike on the pavement. But another said it shouldn’t have happened, as it’s different with children,” Emma told The Journal.

Ultimately, the overall consensus was that the officer should have exercised better discretion in asserting his authority over a 4-year-old, especially considering that she was wearing a helmet, had training wheels and was held by her father on a lead.

“Safety is our priority and cycling on the pavement is illegal,” a police spokesman said. “However, common sense obviously prevails and in the case of young children, officers would use their discretion and offer the most appropriate advice for the circumstances.”

Unfortunately, Sophie’s parents worry the negative experience may have soured their daughter’s overall outlook on police.

“…I’m trying to teach her that [police] are friendly, you know?” says Emma. “If you ever get lost or you need help, you look for the people in the yellow jackets, but now that’s all gone out the window. You can’t… You know? Now they’re scary. ‘They’ll take my bike away.'”

Police apologized to Sophie’s parents, who told the BBC the apology would be better aimed at their daughter.

Lincolnshire police say they are investigating the incident. The officer who approached little Sophie has not been identified and has thus far not come forward.