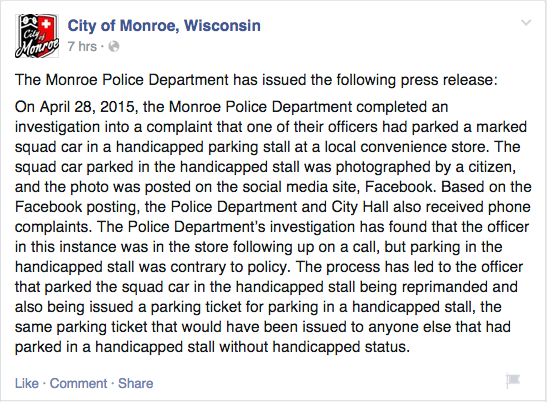 Citizens are applauding a police department in Wisconsin after it held one of their own accountable.

Earlier this week, a Monroe officer received unwanted attention when he was photographed parking his cruiser in a handicap spot at a Kwik Trip convenience store.

The photo made its rounds on social media and eventually made its way back to the department which, along with various complaints, prompted them to investigate the incident.

In an update today, police said their investigation found the officer in question violated the law and would be issued a parking ticket, “the same parking ticket that would have been issued to anyone else that had parked in a handicapped stall without handicapped status.”

Facebook followers responded positively to the news and celebrated justice being served as a mild victory.

“Thank You for being transparent and holding him accountable!” one commenter exclaimed.

Indeed, the cop was only held accountable after an ordinary citizen snapped and shared a photo of the cruiser, another testament to the power of citizen journalism.

The public’s demand for police accountability has even spread to America’s youth, as seen in this viral 2013 video shot by a Las Vegas youngster: