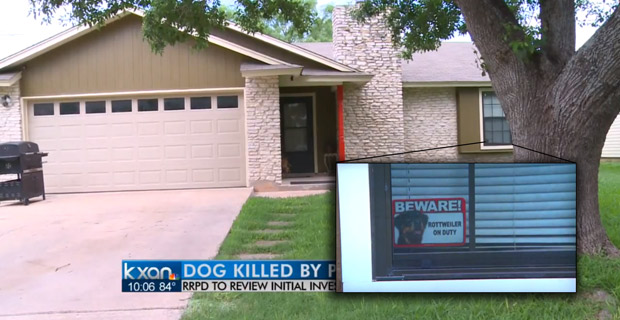 A family is upset the death of their long time companion at the hands of officers from the Round Rock, Texas, police department has been ruled justified.

Last Friday, Russell and Hope Lane didn’t close the door to their house properly, triggering their burglar alarm and a police response.

The Round Rock police chief and a commander entered the Lane’s home around 9am with weapons drawn and encountered their dog Bullet. That’s where the Lanes claim police have changed their story.

“When we first talked with captain Stuart he told us that his officer’s said Bullet stood up on the futon and lunged at them,” one of the dog’s owners wrote on a Facebook page dedicated to seeking Justice for Bullet. “Now since they’ve had time to get their story together it changed. Now bullet barked, growled, showed teeth three feet behind the officer. How did he get from the futon to three feet behind the officers?”

The Lanes say officers also failed to heed a sign hanging in their front door that read, “Rottweiler on duty,” along with a picture of a rottweiler.

On Wednesday, Round Rock Police concluded the shooting was justified. The Lanes say otherwise, and feel the amount of force used to stop Bullet was overkill.

The Lanes are now prepared to take their fight to federal court, alleging violations of their Fourth Amendment.

“We are prepared to go to federal court 4th amendment violation. First they shouldn’t have ever entered the house with that sign in the window,” Russell told Fox 7.

Round Rock police also issued a statement declaring that prior to the “unfortunate event,” they were already looking at “additional training, purchasing equipment and reviewing current policies in dealing with aggressive animals. We have reviewed and selected a nationally recognized training program in dealing with aggressive animals. The training is currently taking place for all commissioned police officers.”

Two years ago, police in Austin, Round Rock’s neighbor to the south, also found it necessary to implement an additional training program so officers could better determine when it was appropriate to shoot animals. Austin police have shot about three dogs since that new training went into effect.