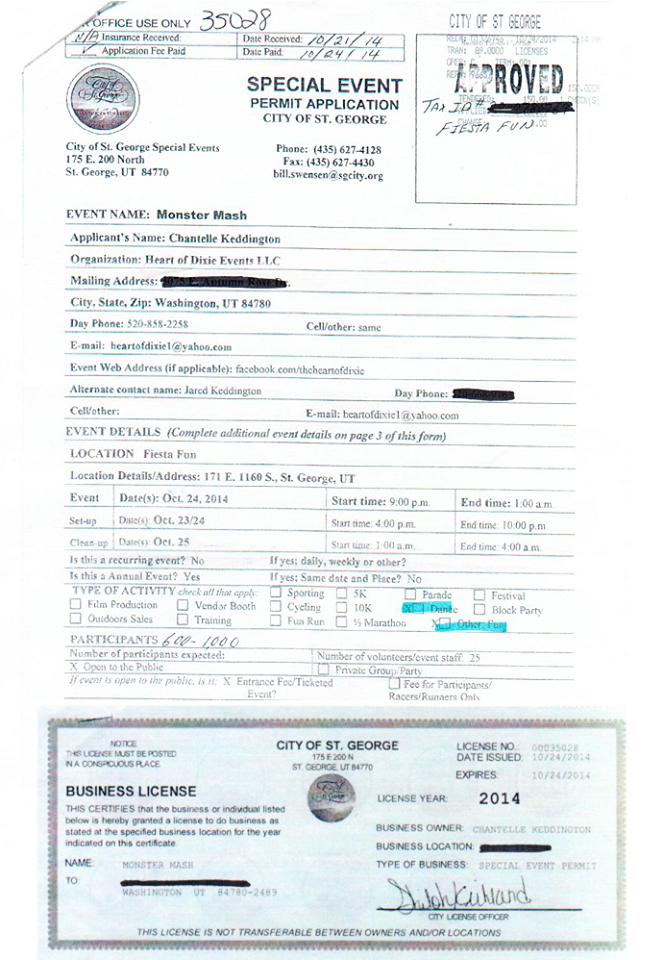 An event organizer in Utah was flabbergasted when police stormed his Halloween party over the weekend and proceeded to monitor partygoers for signs of dancing, even though a permit had been secured with the city in advance.

Cops terminated the Heart of Dixie’s third annual Monster Mash in St. George, Utah, this past Friday, and issued threats of felony arrest to the event’s organizers for violating a city ordinance which prohibits “public dancing” without the approval of the city council.

Calling the city’s seemingly arbitrary rule “not OK,” Jared Keddington, the event’s organizer, told Fox 13 Now that he had followed the city’s rules and secured a permit.

“We were given a permit and then told by officers that we couldn’t have the dance, under threat of being taken to jail with a felony of inciting a riot,” Keddington said, adding that the permit included awkward stipulations that would have been near impossible to comply with.

“Things had been crossed out, and in hand was written, ‘no dance activity permitted,’” Keddington said. “On another page it was typed that the event must not be allowed to become a dance party due to random acts of dancing by patrons.”

Despite the issued permit’s explicit language, the city contends it did not take issue with the “dancing,” but with the organizer’s failure to properly follow the permit process.

“Had this actually come to the city a month in advance, which we typically require for large-scale events, there wouldn’t have been an issue,” a spokesman for the city, Marc Mortensen, stated.

“Do you want them to just ignore the law?” Mortensen added, defending the town police’s crack down. “They were enforcing the law. That’s their job.”

St. George City Code section 3-2A-4 states, “No license for a public dance hall shall be issued until the applicable requirements… of this article have been complied with, and the location of the dance hall shall have been approved by the city council. ”

Nowhere in the City Code does it mention the necessity of having to apply for a permit a month in advance.

Keddington says that the city’s and cops’ actions cost his company a total of $15,000 stemming from people failing to show up after learning that dancing would not be permitted.

Comparisons are now being drawn between the city’s attempt to regulate dancing, and the fictional town in the 1984 film Footloose, in which dancing is prohibited following a tragic event.