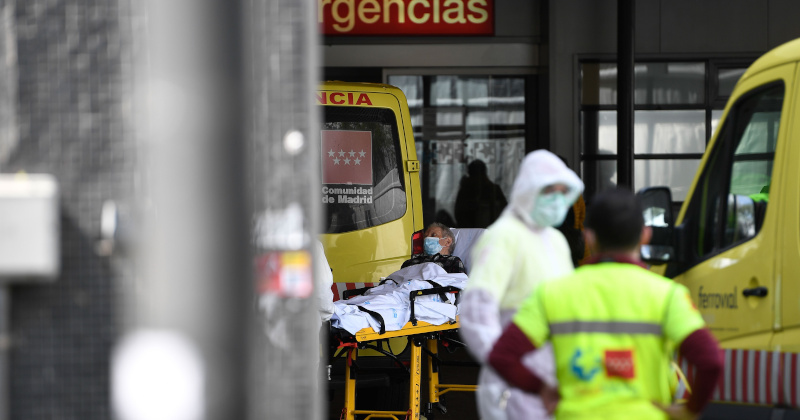 The coronavirus death toll in Spain reached 2,182, adding 462 fatalities overnight, the health ministry said on Monday, while the total number of confirmed cases rose to 33,089 – up from 28,572 cases on Sunday.

Amid mounting alarm over the rising number of cases of and deaths due to the coronavirus, the Spanish government is seeking to extend until April 11 a state of emergency that it has imposed to try to control Europe’s second-worst outbreak of coronavirus.

“We are at war,” Prime Minister Pedro Sanchez told a news briefing over the weekend, calling on Europe to launch a massive, coordinated public investment programme like post World War II’s Marshall Plan.

The nationwide state of emergency, announced on March 14 and intended to last 15 days, bars people from all but essential outings.

The infected in Spain include nearly 4,000 health workers — more than one in ten of total confirmed cases — officials said on Monday.

Like in other countries hit hard by the virus, nurses, doctors and other health workers have said they are not getting enough protective kits. Authorities and companies are scrambling to manufacture, buy and distribute more of them.

Deputy Prime Minister Carmen Calvo was hospitalised on Sunday with respiratory infection and is awaiting coronavirus test results, the government said on Monday. Results for Calvo, born in 1957, will be released as soon as they are known, the statement said.

Two other ministers and the wife of Prime Minister Sanchez have also tested positive for the coronavirus over the past weeks.

With an extension to April 11 of a nationwide lockdown set to be approved by parliament on Wednesday, Fernando Simon, head of Spain’s health emergency committee, said now was not the time for people to relax on respecting rules that ban anyone from leaving their home except to go to work, buy food or go to the pharmacy.

“On several occasions it has been said that the peak (of the epidemic) could be reached this week. Reaching the peak does not involve having controlled the problem, it means that you have to redouble your efforts not to take a step backwards,” Simon said.