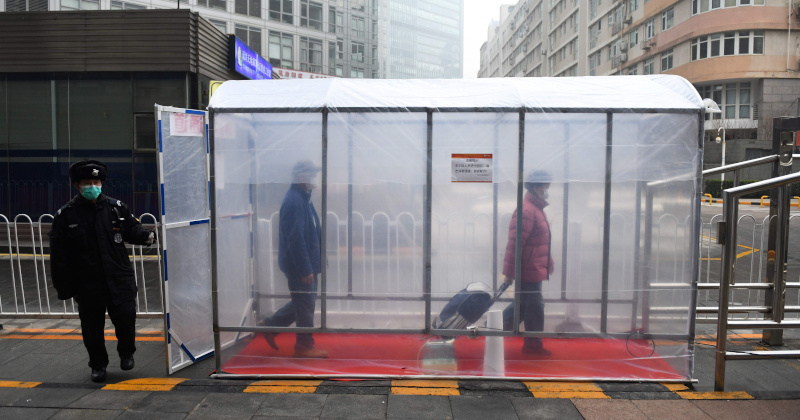 A record 14,800 new cases of coronavirus were reported within 24 hours in China’s Hubei province on Thursday, according to local health officials.

The death toll from the virus in Hubei province also jumped by a record 242 fatalities on Thursday, more than doubling the previous record number of 103 deaths set on Monday.

Clinical diagnosis of COVID-19, as the virus has been officially named, includes using lung imaging to verify suspected infections.

Previous diagnostic methods were restricted to nucleic acid tests, which identify genetic information to detect viruses but can take days to process.

Too soon for optimism?

The drastic jump comes after official figures showed coronavirus cases had dropped for two days in a row. Chinese President Xi Jinping chaired a meeting of the ruling Politburo Standing Committee in Beijing on Wednesday to tout the “positive results” of the government’s drastic measures to contain the virus.

“I think it’s way too early to try to predict the beginning, the middle or the end of this epidemic right now,” said Michael Ryan, head of WHO’s health emergencies program.

Yanzhong Huang, a senior fellow for global health at the Council on Foreign Relations in the United States, told DW that he expects new cases of coronavirus to drop between late April and early May.

At least 1,355 people have now died and nearly 60,000 have been infected in China after Hubei’s health commission reported the new numbers. There are currently several hundred coronavirus cases in 27 countries outside of China.

On Thursday, following the release of the new figures, Chinese state media announced that the party secretary of Hubei province, Jiang Chaoliang, was sacked and would be replaced by the mayor of Shanghai, Ying Yong.

Two of Hubei’s senior health officials were also removed Monday. The province is at the epicenter of the outbreak.

In Cambodia, the cruise ship MS Westerdam was allowed to dock in the port town of Sihanoukville after being turned away by five countries over fears that someone on board may have the coronavirus.

According to the ship’s operator, Holland America, none of the 1,400 passengers and 800 crew members were infected with the virus.

The ship spent two weeks at sea after being turned away by Japan, Taiwan, Guam, the Philippines and Thailand.

Another 44 people aboard a cruise ship that has been quarantined for over a week in Japan’s Yokohama harbor tested positive for coronavirus Thursday, Japanese health officials said.