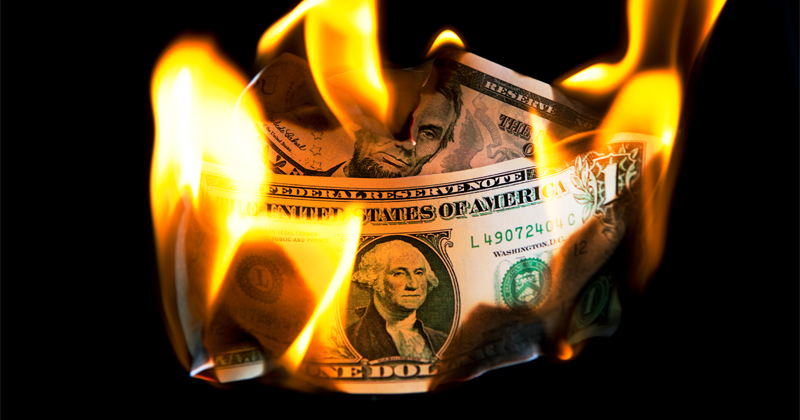 Last month we reported that the Chinese government has launched a pilot program for a digital version of the yuan. The virtual currency ups the ante in the war on cash and creates the potential for the government to track and even control consumer spending.

China isn’t alone in using COVID-19 as an excuse to push people away from physical cash. Other countries are pushing narratives to drive the movement toward a completely digital economy – one where governments can track and even control what we buy.  The war on cash has been going on for years, but the pandemic has put efforts on hyperdrive.

In an article published on the Mises Wire, economist Claudio Grass explains how coronavirus is being used to supercharge the war on cash.

The views expressed below are those of Claudio Glass and do not necessarily represent those of SchiffGold or Peter Schiff.

The corona crisis has already taken a very high toll and caused deep damage in our societies and our economies, the extent of which is yet to become apparent. We have seen its impact on productivity, on unemployment, on social cohesion and on political division. However, there is another very worrying trend that has been accelerated under the veil of fear and confusion that the pandemic has spread. The war on cash, already underway for almost a decade, has been drastically intensified over the last few months.

Over the last years, and as the war on cash has escalated, we’ve gotten used to hearing certain arguments or “reasons” why we should all abandon paper money and move en masse to an exclusively digital economy. These talking points have been repeated over and over, in most Western economies and by countless institutional figures. “Cash is used by terrorists, money launderers, and criminals” is arguably the most oft-repeated one, as it’s been widely employed in most debates about the digital transition. Just a couple of years ago it was also used by Mario Draghi to support the decision to scrap the 500-euro note. We didn’t get any specific information or data about how many terrorists were actually using this high-denomination note, but we do know that a lot of law-abiding citizens were using it to save, as were small business owners for their operational liquidity needs.

Now, however, the corona crisis has introduced a whole new direction for anti-cash rhetoric and fresh arguments in favor of a digital economy. Even in the early stages of the pandemic, when essentially nothing was concretely known about the virus or its transmission, the seeds of new fears were already being planted by sensational media reports and fear-mongering political and institutional figures. The insidious idea that “you can catch COVID through cash” may have been prematurely spread, but it did stick in most people’s minds. This is, of course, understandable given the extremely high levels of uncertainty and anxiety in the general public. Wanting to eliminate potential threats was a natural instinct and so was the urge to take back at least some control over our lives after they’d been thrown into utter chaos by the global economic freeze.

Another factor that concretely helped the shift away from physical cash was an entirely practical one. Given the lockdown measures and the new “social distancing” directives that were enforced all over the world, it became difficult to use cash even if you really wanted to, or if you had no other means of transaction, as is the case for billions of people. With physical stores being forced to shut down and with more and more online shops offering contactless delivery (either as a choice or as a service requirement), the need for cash very quickly gave way to digital payments.

For most of us who have access to online banking, cards, or other digital payment services, this introduced no real inconvenience, and we probably didn’t even give it a second thought. However, for many of our fellow citizens, it was a serious impediment that in some cases blocked their access to basic goods and essential supplies. Contrary to the glowing promises of the digital economy, of financial inclusion and convenience, the fact remains that there are still millions of people who simply do not have access to this brave new world. According to figures by the World Bank, globally there are 2.5 billion people with no bank account, with a high concentration in the developing world. In the West too, however, there is a very large part of the population that is unbanked and/or has no access to digital solutions, while the elderly are also to a very large extent “locked out” of the digital economy. For all these billions of people, cash is the only way to save, to transact, and to cover basic needs.

With cash being presented not just as a danger to society and to national security, but also as a direct health hazard due to the coronavirus, the push toward digital alternatives has been massively reinforced over the last few months. Both international organizations and individual governments have actively participated in and encouraged this push, some through public guidance statements and others through the blunt enforcement of direct rules and measures that leave no real room for citizens to make their own choices.

The Centers for Disease Control and Prevention in its official guidance to retail workers recommended that they “encourage customers to use touchless payment options,” while a report by the World Bank highlighted the need to adopt cashless payments for the sake of “social protection.” The UAE Central Bank encouraged the use of online banking and digital payments “as a measure to protect the health and safety of UAE residents,” and the Bank of England has acknowledged that banknotes can hold “bacteria and viruses” and recommended that people wash their hands after handling money. In March, a report from Reuters revealed that the US Federal Reserve was quarantining dollars that it repatriated from Asia and so was South Korea’s central bank, while the government forced banks in China to disinfect bills and keep them in a safe for up to fourteen days before putting them in circulation.

A highlight, however, came in May when the World Economic Forum published an article in its Global Agenda strongly supporting the mass adoption of digital payments for the sake of public health. In it the authors argue that “contactless digital payments at the point of sale, such as facial recognition, Quick Response (QR) codes or near-field communications (NFC), can make it less likely for the virus to spread to others through cash exchanges.” They also applauded the efforts of China in digitalizing payments and appeared to hold the country and its measures as a model to be emulated: “China’s path to enabling digital payments should provide some lessons to other countries eager to follow suit.” Since a number of Western governments may indeed be “eager to follow suit,” let us take a closer look at this bright example and examine what it really entails.

The digitalization drive in all aspects of the Chinese state, society, and economy is nothing new and it certainly predated the emergence of COVID-19. The country’s infamous “social rating system” made headlines years ago, and the government’s eagerness to use technology, the internet, and all sorts of digital systems to track its citizens’ behavior and affiliations has long attracted international criticism and widespread condemnation by human rights organizations, privacy advocates, and free speech supporters. Now, however, the state has been given a reason to accelerate its efforts in the mass adoption of digital payments and the abandonment of cash.

To a large extent, this digitalization of payments task was much easier in China, as digital payments there were already very widespread. More than 80 percent of consumers already used mobile payments in 2019 according to management consultancy Bain, a sharp contrast with the US, which had adoption rates of less than 10 percent. So, as the population had already accepted a new form of payment, the new initiative sought to dominate the means of payment too. Thus, a new “digital yuan” was introduced. This new fiat currency, which has been in development for over five years, was rolled out in April in four Chinese cities, with a plan for national adoption soon so that it eventually replaces the physical legal tender.

This so-called Digital Currency Electronic Payment (DCEP) will be put into circulation through China’s big four state banks, and citizens will be able to receive and use it by downloading an electronic wallet application authorized by the People’s Bank of China (PBOC), which will be linked to their bank account. On the surface, it appears to work just like the old currency. It is issued and backed by the PBOC; it’s valued the same as the physical banknotes; and, thanks to partnerships with Alipay and WeChat Pay, which control 80 percent of the country’s payment market, it will be used to pay for anything and be paid by anyone. In fact, some public servant salaries and state subsidies are already being paid out in this new digital yuan, arriving in their intended recipients’ digital wallets.

According to China’s state media, People’s Daily, the new currency is meant to simplify domestic transactions and trade, but it will also facilitate and ease cross-border transactions. The implication here is clear: it is yet another attempt to challenge the global dominance of the US dollar after the Belt and Road Initiative failed to really move the needle as the Chinese state had hoped. The strategy of spending huge amounts of Chinese money abroad did provide some leverage over developing countries, but it didn’t come anywhere near “dethroning” the dollar and internationalizing the renminbi. Perhaps this initiative will fare better, especially as China now has the “first-mover” advantage.

Entering this “digital fiat” arena first is hugely important, and the timing of the digital currency’s launch was no coincidence. The development and the rollout plan were significantly accelerated following Facebook’s announcement of the libra, as the Chinese state wouldn’t have the private tech giant beat them to the punch. In fact, the digital yuan resembles the libra in many ways. Most importantly, neither of them is a cryptocurrency, which is decentralized by design and allows for peer-to-peer transactions without the need of an intermediary or third party. In this case, the issuer is the third party, and all transactions go through a very centralized system that controls and has access to all the data. In another noncoincidence, just a few years back, China’s government banned initial coin offerings (ICOs) and placed great burdens on cryptocurrencies and crypto investors, making it very hard to operate in the country, thereby dismantling the threat of potential competition from the private sector and clearing the way for its own digital coin.