Group backed by NATO against Syria takes to Facebook, states it has no intention of targeting Britain

An al-Qaeda linked group in Syria is threatening to stage attacks in the United Kingdom against public transport and financial centers. The group also allegedly threatened the White House in the United States. 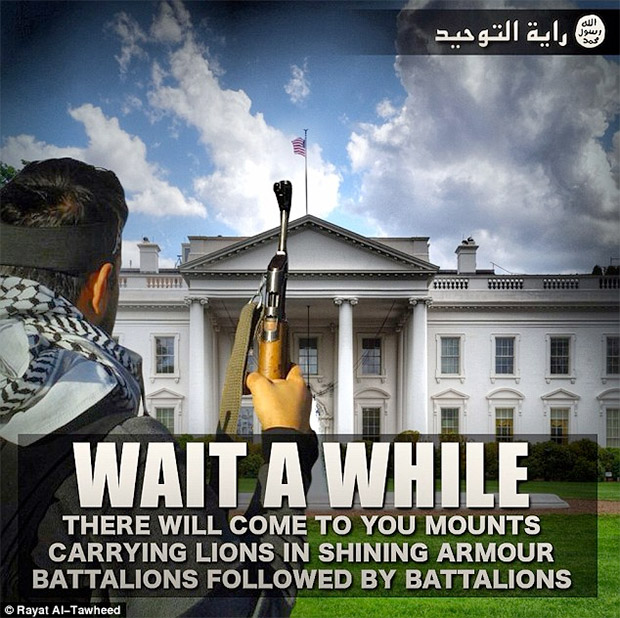 Rayat Al-Tawheed, a British jihadist group, posted the threat online. The Daily Mail posted a number of graphics apparently created by the group showing a jihadi fighter posed before the White House and a landscape of destroyed office buildings.

A post on the Rayat Al-Tawheed Facebook page, however, disavows the threat. It says the group has no intention of attacking targets in Britain.

Rayat Al-Tawheed lists ISIS Mujahideen as a community member on its Facebook page. ISIS, or the Islamic State of Iraq and Greater Syria, has fought rival factions in Syria, including al-Nusra and the Islamic Front. On Sunday, al-Qaeda allegedly took to jihadi forums to denounce the group and “it has no connection with the group.”

In April, al-Qaeda leader Ayman al-Zawahiri ordered ISIS to disband and return to Iraq. ISIS refused the order. “I have to choose between the rule of God and the rule of al-Zawahiri, and I choose the rule of God,” replied Bakr al-Baghdadi, who is said to be the leader of al-Qaeda in Iraq.

Earlier this year the corporate media dubbed al-Baghdadi the poster boy of al-Qaeda in Syria. He spent time as a detainee at Camp Bucca at Umm Qasr located in southern Iraq, which should raise suspicion about his meteoric rise in the Iraqi branch of al-Qaeda. He has threatened to attack targets in the West.

“You will see the mujahideen [holy warriors] at the heart of your country,” he warned in an audio statement. “Our war with you has only started now.”

British intelligence has collaborated with jihadist terrorists in the past. In 1996 senior members of the British al-Muhajiroun group – Bakri Mohammed, Abu Hamza and Haroon Rashid Aswat – were recruited to wage jihad in the Balkans.

“The British government knows who we are. MI5 has interrogated us many times. I think now we have something called public immunity,” Bakri Mohammed said in 2000.