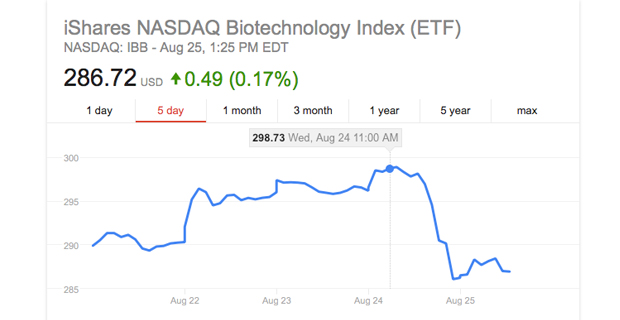 Hillary Clinton’s recent tweet attacking biotech firms lowered their stocks significantly, but not before an insider made a 2900% profit by “predicting” biotech stocks would collapse.

On Aug. 24, Hillary blasted the biotech sector over recent price hikes for autoinjectors – which she reportedly uses herself to prevent seizures – but roughly three hours before Hillary sent out her tweet, a stock trader placed an usual “put option” that the biotechnology index would collapse within two days.

EpiPens can be the difference between life and death. There's no justification for these price hikes. https://t.co/O6RbVR6Qim -H

The put option, which gives the owner the right – but not the obligation – to sell an asset at a “strike” price (in this case $290 – far below the trading price), was set to expire on Aug. 26 and would have been completely worthless unless Hillary sent out her tweet.

“These puts for IBB [the biotech sector index] 290.00 strike with an expiration date of August 26th were worthless before [Hillary’s] tweet,” a diagram uploaded to Imgur revealed. “Roughly three hours before the tweet goes out, an usual block order worth $1900 is executed.”

“Far above normal volume for a worthless strike price.”

A 3 hour 2900% profit in the market, suspiciously timed with HRC’s Epipen tweet! Crook!

But once Hillary sent out the tweet, the stock did collapse below $290 per share, and whoever made the “prediction” just made a ton of money.

It’s as if someone connected to Hillary knew the tweet would happen, and business journalists directly contributed the stock collapse to Hillary’s tweet.

“Thanks a lot, Hillary! That is probably what investors in the biotech sector, and Mylan Inc. specifically, are saying after an ugly day for the health care sector on Wednesday,” MarketWatch reported. “Shares of Mylan Inc. ended the day with a 5.4% loss as criticism over the drugmaker’s decision to jack up the price of lifesaving EpiPens reached a crescendo, dragging the health-care sector and the broader market along with it.”